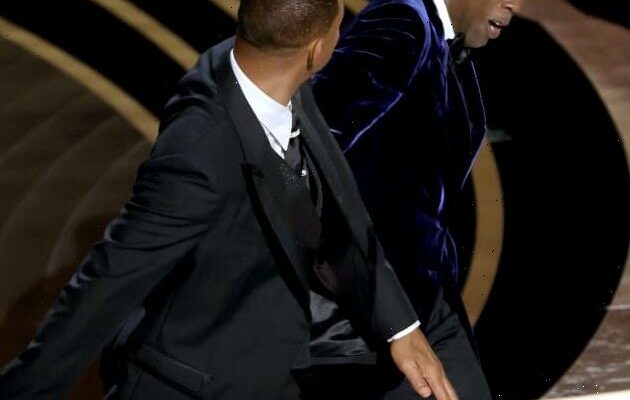 The 2022 Academy Awards delivered what many believe to have been the most stunning moment in broadcast history on Sunday night.

And it had nothing to do with any unexpected winner.

At one point during the live ceremony, Chris Rock made a joke about Jada Pinkett Smith, quipping of the actress (who was in the crowd) and her shaved head:

In response to Rock’s attempt at humor, Jada’s husband, Will Smith, walked up to Rock AND SLAPPED HIM IN THE FACE.

“Oh wow,” said a seemingly taken-aback Rock as Smith made his way back to his seat. “Will Smith just smacked the s— out of me.”

“Keep my wife’s name out your f—ing mouth!” Smith screamedd at Rock after taking his seat again, much to the complete shock of everyone in attendance and everyone at home.

“Wow, dude, it was a G.I. Jane joke,” replied Rock … to which Smith responded once more: “Keep my wife’s name out your f—ing mouth!”

“I’m going to, okay?” Rock said on aiir, before going on to say “that was the … greatest night in the history of television” and then presenting the award for which he was there for.

In 2018, Pinkett Smith opened up about her “issues with hair loss” during an episode of her show Red Table Talk, explaining:

“It was terrifying when it first started. I was in the shower one day and had just handfuls of hair in my hands and I was just like, ‘Oh my god, am I going bald?'”

Accepting the trophy, Smith broadly addressed the slap — but definitely did not apologize for it.

“Oh, man. Richard Williams was a fierce defender of his family,” the Best Actor began as he got visibly emotional.

“I’m being called on in my life to love people and to protect people and to be a river to my people. I know to do what we do, you got to be able to take abuse.

“You got to be able to have people talk crazy about you.

“In this business you got to be able to have people disrespecting you. And you got to smile, you got to pretend like that’s okay.”

Smith then revealed what Denzel Washington told him after the superstar comforted him during the commercial break.

“Denzel said a few minutes ago, ’At your highest moment, be careful, that’s when the devil comes for you,’” Smith said. “It’s like, I want to be a vessel for love….

“I want to say thank you to Venus and Serena and the entire Williams family for entrusting me with your story.”

He ended his speech with a mea culpa. Just not one for Rock.

“But love will make you do crazy things. … Thank you for this moment.

“And thank you on behalf of Richard and the entire Williams family. Thank you. I hope the academy invites me back.”

Watch the Slap Heard ‘Round the World above.