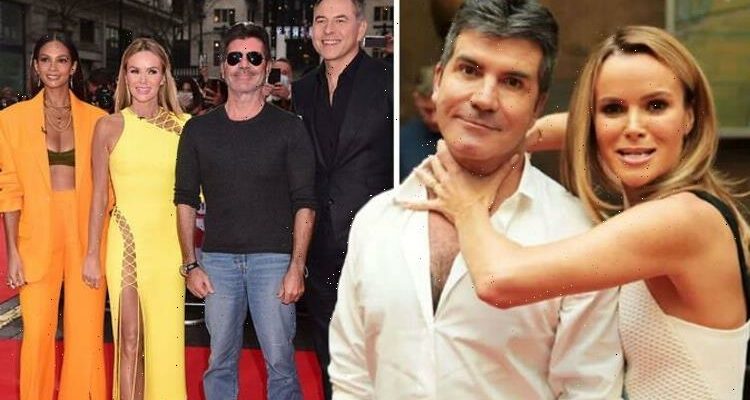 Simon Cowell revealed Amanda Holden went to extreme lengths to ensure she was signed up as a judge for the next series of Britain’s Got Talent. Brandishing her contracts, Amanda admitted she had turned up at Simon’s home in a bid to get him to sign them.

Joining a Q&A with Express.co.uk and other press live from Simon’s house in LA, Amanda held up some sheets and admitted: “I’ve got my contracts here, I’m getting them signed – that’s why I’m here!”

Simon confirmed: “I’m not kidding, she turned up with contracts!”

Simon went on to joke that Amanda had demanded in the contract that no crew member is allowed to make eye contact with her.

He opened up on why it might be that the judging line up had not changed in so long, with Amanda Holden joining in the first series, David Walliams in series three, and Alesha Dixon in series four in 2012.

“We’ve all got different opinions, everyone in their way, has got their own kind of expertise.”

He cheekily added: “David is sometimes a comedian.

“Alesha knows an awful lot about singing and dance, I know quite a bit about music, and Amanda….juggles.”

Simon continued: “You know you’ve got a good group around you when you can argue without feeling bad about arguing.

“So when we disagree, which we do a lot, it’s not uncomfortable. That’s when you know it’s a fun place to work.”

Alesha added: “We laugh a lot.”

“I can’t stop laughing, at all the wrong times,” said Simon.

“Even though they are long days, I feel good afterwards.”

The judges also discussed how becoming parents had changed the way they looked at children who audition.

David said: “We didn’t have children when we joined the show, except for Amanda, and that probably makes us more sensitive.

“Especially when kids come on and perform, we are absolutely rooting for them, thinking, ‘That could be our child out there.’”

Referring to his eight-year-old son, Simon added: “I was like, my god, what if that was Eric!?’

“It would be like… Wow. I would be petrified.”

* The new series of Britain’s Got Talent begins on Saturday, 16th April at 8pm on ITV