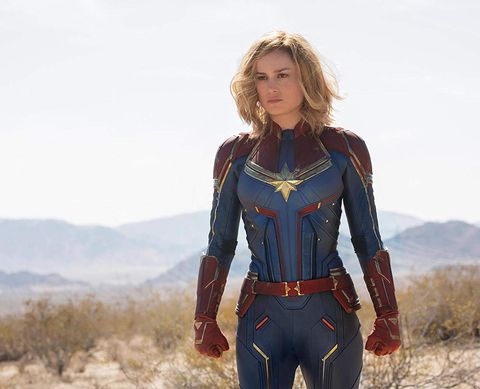 Brie Larson packs some serious punch in the new Captain Marvel trailer, which should come as no surprise to anyone who’s been following the epic strength training routine the 29-year-old Oscar winner embarked on in preparation for the role. For more than a year now, Larson has been sharing snippets of her workouts, including pull-ups, weighted pushups, and some moves with a sledgehammer that put Thor on notice.

In an interview with members of the media published by E! News on Tuesday, Larson revealed she never liked working out before training for her role as the first female lead in an Avengers movie, saying that in the past, she had been “more interested in my body never being part of the conversation.” But rather than being an exercise in “objectification,” as she had feared, gearing up for the flick gave her an even greater sense of ownership over her body.

“I just wanted to be a brain, so I’ve only cared about reading books and understanding words, and anything that involved my body made me itchy,” Larson said. “But this was an opportunity for me to … make my body mine.”

Larson, who won Best Actress at the 2015 Academy Awards for her stirring performance in Room, said that her strength training—which included 215 lb. deadlifts and 400 lb. hip thrusts—didn’t just transform her physically, but also helped her prepare mentally to become Captain Marvel, the most powerful hero in the Marvel Comics Universe.

“A huge part of [Captain Marvel] is her strength,” Larson said. “I knew if I could go through that experience, I would get closer to her and I’d understand [her].”

That’s all on full display in the latest Captain Marvel trailer that dropped Monday, which depicts Larson’s Carol Danvers, aka Captain Marvel, fighting a suspiciously strong old lady on a bus, battling in space, and bantering with Samuel L. Jackson’s eyepatch-free Nick Fury.

The latest trailer, which aired during Monday Night Football, had already racked up close to eight million views on YouTube by Tuesday morning. The first trailer for the latest Avengers flick came out in September. Both trailers showed off Larson’s strength, which she said she hopes inspires the young girls who’ll see the first female-led Avengers film when it comes out next March.

“I love that she is unapologetic,” Larson said of her character. “I love that she is not apologizing for her strength … She’s never trying to shrink herself because of who she is, and she can’t be somebody else even if she wanted to.”