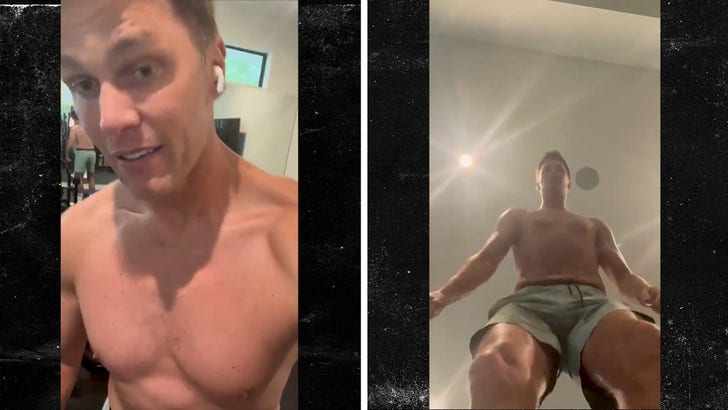 Tom Brady is showing, yet again, he’s kicking Father Time’s ass — revealing on Thursday that he’s got a GREAT bod!!!

TB12 just shared an ad for his clothing brand on his social media page … and in the footage, you can see Tom is looking jacked these days.

The clip starts with the 44-year-old talking to someone off-camera while shirtless — and you can see in the commercial, his pecs, biceps and shoulders are looking huge.

Later in the footage, as he put the camera toward the ground — he revealed his quads look ripped as hell too!!

Brady, though, didn’t stay without clothes for too long (sorry, everyone) — because after he “stepped on” his phone, he donned one of his “Brady Brand” jackets in an effort to get fans to buy the swag.

Of course, Brady hasn’t always had a body like this — he famously was a bit doughy coming out of Michigan in 2000.

But, he’s been all avocados and protein in the years since — and the results are hard to ignore.

As for his clothing line — which he kicked off back in January — the jacket he was hawking in the ad comes with a $145 price tag … but if it makes ya look anything like Tom does in it, that’s a bargain in our book!