Tiffany Haddish is one of the rare celebs to come out of quarantine with a major weight loss, as well as super ripped abs! The comedian is telling fans how she dropped 40 pounds during lockdown.

Tiffany Haddish‘s home quarantine turned out to be the best thing for her body, as she ate fresh and nutritional vegetables right out of her own backyard garden. She also made sure to get some degree of calorie burning exercise done on a daily basis. As a result, the Girls Trip star has lost a stunning amount weight from of her already fit figure since home lockdown began in March. “During this COVID period, I’ve lost 40 pounds,” the 41-year-old tells PEOPLE in a new interview.

“I’ve been eating differently, eating way more vegetables, definitely eating directly out of my garden and just really putting in the work, making sure I sweat every single day and staying up on nutrition – nutrition is everything,” the she tells the publication. 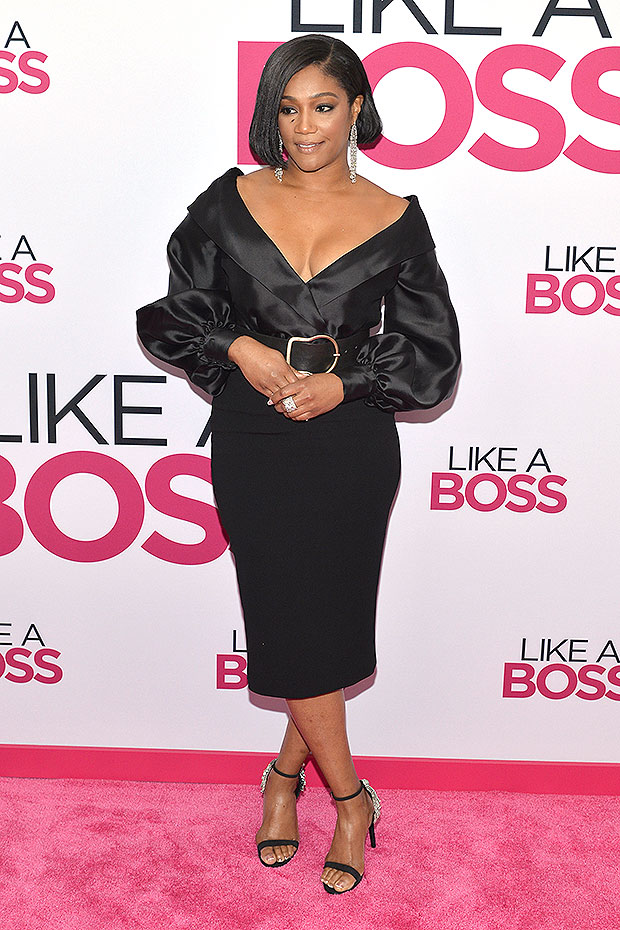 Tiffany also reveals that she’s been exercising “anywhere from 15 minutes to sometimes two hours.” And it isn’t all strength and cardio, as the comedian says, “And I try to dance every day for like five to ten minutes. I think that’s really important, too: Make it fun!” In the Nov. 30 photo below, Tiffany is 40 pounds lighter than in the Jan. 2020 picture above.

As a result, Tiffany now has abs and her body is becoming ripped. She just started the 30 Day Transformation challenge right after Thanksgiving and showed a mirror a selfie to fans on Nov. 30. Her toned obliques are already coming along nicely, and Tiff even claimed that her chest was shrinking as her bra had become more loose. “I had this thought in my mind that I want the body of Flo-Jo!” Tiffany told PEOPLE, referring to late Olympic gold medalist track star Florence Griffith Joyner, who still holds the record as fastest woman alive. The funny lady is definitely getting there!

It should come as no surprise to fans of Tiffany’s Instagram account that she lost so much weight during quarantine by living off of her garden’s bounty. While everyone else was baking banana bread and ordering in pizza, the Night School star was giving fans video tutorials of the contents of her vegetable garden and what kind of nutrition her plants had.

In a March 31 video while L.A. was still deep in home lockdown, Tiffany hilariously put on tight blue mermaid leggings that forced her to jump around her yard so that she got a cardio workout in. She then pointed out how she was going to “eat some chard and juice some celery,” while showing off the plants in the ground. Tiffany also added that her beet collection was coming along well, and though the veggie “tasted like dirt,” she praised their high nutritional value. At the end of her garden tour, Tiffany told fans she figured she burned off at least “168 calories” just by forcing herself to hop around her garden in the tight skirt, instead of leisurely walking. Now that she’s started an actual fitness plan, Tiff really will have Flo-Jo’s body by Christmas!