Over the past few months, hundreds of people in more than 33 states have been admitted to the hospital with mysterious lung ailments, all of which have been linked to the use of e-cigarettes, prompting the FDA and Centers for Disease Control (CDC) to launch a full-scale investigation into the phenomenon. Last week, the New York state department of health shed more light on the mystery with reports that 10 out of 18 of the bootleg THC cartridges they had received from patients had tested positive for vitamin E acetate, a compound most often used in topical skin creams and supplements.

Now, as more information emerges, it’s becomingly increasingly clear that cannabis vapes are playing a major role in many, if not most, of the cases of mysterious lung ailments. As a result, there’s been increased nationwide focus on the largely unregulated black- and grey-market cannabis vape industry — more specifically, on companies that sell diluents containing vitamin E acetate.

How to Spot a Bootleg Cannabis Vape Cartridge

On Monday, Governor Andrew Cuomo confirmed that vitamin E acetate used in diluent products made by vaping companies may play a large role in the health crisis. In a statement, he confirmed that three companies that sell thickening agents containing vitamin E acetate had been served with subpoenas ordering them to assist with the FDA investigation. Thickening agents are meant to dilute and thicken vape oil mixtures, and are used almost exclusively in THC vape products.

“The rise in vaping-associated illnesses is a frightening public health phenomenon, and I am directing the Department of Health to take several actions to address this crisis, including starting an investigation into some of these companies that produce vaping substances to find out what’s in it, and requiring that smoke and vape shops post a warning that lets people know that this is a risky activity,” Cuomo said in a statement.

The three companies that have received subpoenas are Mass Terpenes, an Amherst, Massachusetts-based company that sells Pure Diluent; Honey Cut, a Santa Monica, California-based company that sells Honey Cut Diluting Agent; and Floraplex Terpenes, an Ypsilanti, Michigan-based manufacturer that sells Uber Thick. All three of these companies have pulled its products from the market, with the website for Honey Cut vanishing entirely, according to the cannabis news publication Leafly. All three of these products also contain “nearly pure vitamin E acetate oil,” according to officials from the New York State Department of Health.

As of Monday, Mass Terpenes has completely removed its Pure Thickener diluent from its website, which was described as “a proprietary formula composed simply of flavorless terpenes and a derivative of Vitamin E (to preserve color and consistency),” according to a cached version of the website. The Mass Terpenes website has since completely scrubbed any mention of the product, adding a disclaimer in small text encouraging consumers to avoid buying products containing vitamin E for the time being.

Floraplex, a company that sells terpenes and diluents, had also quietly removed its listing for Uber Thick, a “high-viscosity terpene diluent” that retails for $3,499 per gallon, according to a cached version of the listing. The Floraplex website does not appear to contain any language clarifying why the product was removed from sale, nor does it contain any reference to the recent reports of vitamin E acetate making consumers ill. 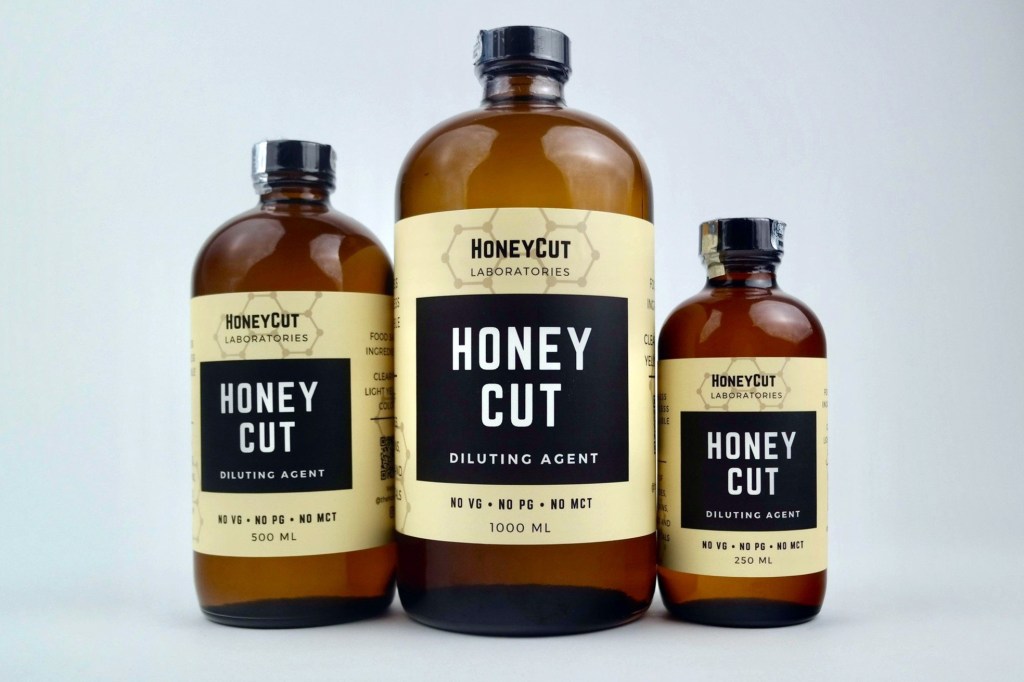 The admin behind the THC vaping watchdog account DankbustersOfficial called out the company on Instagram. “fuck @massterpenes . This is who has been pushing the Vitamin E. ‘pure’ diluent. admitted to using vitamin E. don’t fucking use diluents. they’re not fucking safe,” the post said.

Neither Mass Terpenes nor Floraplex has returned Rolling Stone’s request for comment. Nicholas D. Myers, the attorney listed on the trademark filing for Honey Cut Labs LLC, also did not return a request for comment by press time.

To be clear, the FDA has said that it is too early in the investigation to determine whether vitamin E acetate is the culprit behind the recent spate of illnesses, with a spokesperson saying that “no one substance, including Vitamin E acetate, has been identified in all of the samples tested. Importantly, identifying any compounds that are present in the samples will be one piece of the puzzle but will not necessarily answer questions about causality.” Yet as more information emerges, the health risks associated with diluents of containing Vitamin E acetate have become increasingly clear.

Traditionally found in skin creams and supplements, vitamin E is harmless when applied topically or taken orally. When inhaled, however, it can lead to lipoid pneumonitis, a condition that is the result of fat particles being ingested in the lungs, as Dr. Melodi Pirzada, chief of pediatric pulmonology at NYU Winthrop Hospital in Long Island, previously told Rolling Stone. Lipid pneumonitis is characterized by symptoms such as chest pain, coughing, and difficulty breathing, all of which have been reported by patients who said they had recently used black market THC cartridges. In recent years, vitamin E acetate has been increasingly used as a thickening agent in vape oil, despite the fact that the safety instructions for Vitamin E acetate suppliers like Lotioncraft, which was provided to Rolling Stone, specifically advise users to “keep away from heat and sources of ignition” and to “not ingest/do not breathe gas/fumes/vapor/spray.”

Such instructions specifically advise manufacturers to avoid marketing vitamin E acetate for anything other than topical use. For this reason, “for companies like Floraplex or Mass Terpenes to say ‘Hey, we didn’t know this would hurt people, and we don’t sell it to be inhaled or ingested,’ is complete BS,” says Peter Hackett, the president of AirVapor systems, a vape hardware supplier.

Generally speaking, the use of diluents in vape oil is not exactly new. In the past, MCT oil and polyethylene glycol were typically added as cutting agents, Thomas Whitten, lead consultant at WeedRAR, a cannabis manufacturing consultancy firm, tells Rolling Stone. “The problem was that it’s a thin liquid so it tends to make the product more runny,” he says. “So when the consumer sees the product runny in their cartridge, they assume it’s less pure.” Vitamin E oil was primarily used as both a cutting and thickening agent, effectively to “trick the consumer into thinking their products are more pure than they is.”

In the past, vitamin E oil was used in relatively small amounts, or “less than 20% of the mixture,” says Hackett. Due to a cannabis supply chain shortage in California — thanks in large part to the recent adoption of “track and trace” protocols, as well as increasing demand — black-market suppliers will now use “higher percentage of thickeners (50% or more) in their mixtures to ‘fill out’ the very low potency vape carts,” he says. As Whitten puts it, “there’s so much cutting agent even the people who made the cutting agent didn’t expect it to be cut that much.”

One of the newer entries to the market is Honey Cut, an odorless, tasteless diluent that surfaced last year, according to Leafly. The origins of its manufacturer are largely unknown, though the company is Santa Monica-based, a trademark application from March 2019 says “the contact name and address are hidden from the general public at the instruction of the applicant/owner.”

At approximately $2 per gram, Honey Cut wasn’t exactly cheap, but it rapidly developed a reputation as a way to thicken vape oil to make it look more legit, says Aaron Riley, CEO at CannaSafe, the largest cannabis testing laboratory in California. “It looks like cannabis oil. It has the same color, it’s odorless. It was considered the best cutting agent,” he tells Rolling Stone. He estimates that probably “75-80%” of black-market vapes use some form of cutting agent.

Tests conducted by the terpenes manufacturer True Terpenes found that it had tested positive for tocopherol acetate, also known as vitamin E acetate; while the New York Health Department’s own testing confirmed this. (For what it’s worth, True Terpenes has been ensnared in its own drama, with DankbustersOfficial publishing a lab report suggesting that the brand’s own diluent was 100% mineral oil, which would produce similar effects as inhaling vitamin E acetate, including coughing and shortness of breath. True Terpenes did not yet respond to requests for comment.)

Diluents like Honey Cut are primarily used by black market vape cartridge manufacturers, which make up a huge percentage of the THC vape market. And Riley says the best way to stay safe is to purchase pens directly from licensed dispensaries. “It all starts with buying it from a legitimate source. If you’re not going in a dispensary then the product you’re buying is not legitimate…[dispensaries] have a responsibility to protect consumer safety,” he says.

Of course, consumers in states where marijuana is not legal don’t have this option, and even legal dispensaries in California are not currently required to test for vitamin E acetate or other cutting agents. While that’s likely to change as a result of the recent cases of vaping-related lung ailments, many in the industry say that the recent vaping-related hospitalizations further highlights the need for legalization and regulation.

“These unfortunate incidents reinforce the need for greater regulation, standardization, and oversight of the cannabis market — principles which NORML has consistently called for in the cannabis space,” NORML deputy director Paul Armentano says in a statement sent to Rolling Stone. “Consumers must also be aware that not all products are created equal; quality control testing is critical and only exists in the legally regulated marketplace.”

In the meantime, even vaping enthusiasts are now urging caution — not just with bootleg cartridges, but with THC cartridges in general. Whitten refers to the current cannabis industry landscape as a “shitshow.”

“Put it this way: I would not touch a pen [right now] even if it was from a licensed facility,” he says.