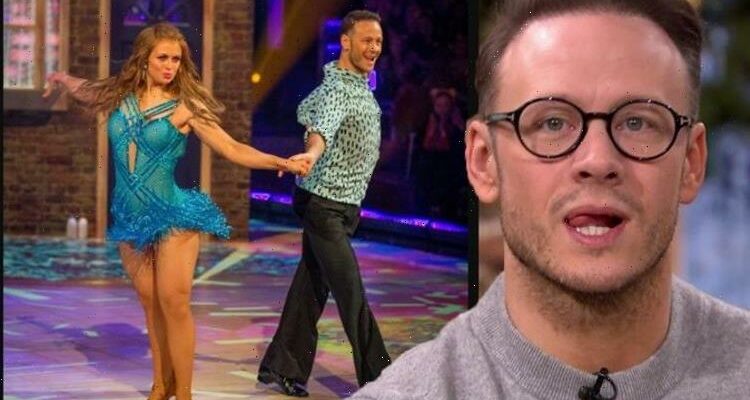 Kevin Clifton explains why he took a break from his podcast

Kevin Clifton, 38, has alleged viewers of Strictly Come Dancing “don’t mind” if male contestants have had a “bit of training”, but some can take issue if their female counterparts have danced before. The former show professional used EastEnders star Maisie Smith’s appearance in the 2020 series as an example, discussing the supposed backlash she received after doing ballet in the past.

Speaking on his self-titled podcast with sister Joanne Clifton about this year’s contestant McFly frontman, Tom Fletcher, Kevin said: “I feel like the general audience of Strictly Come Dancing doesn’t mind it so much if a male celebrity has a bit of training, they don’t like it when a female celebrity has training.

“That is my experience of it,” he stated.

Tom attended the prestigious Sylvia Young Theatre School as a youngster, where he met his now-wife Giovanna Fletcher.

He has appeared in West End musicals including Oliver before finding international success with his band McFly.

Kevin continued: “We talked about this a lot last year when Maisie was on the show, and people were having a go, but everybody loved say Danny Mac, who had training.

“So whether he [Tom] is trained or not I don’t think it will make too much difference for him,” he finished.

Danny appeared in series 14 alongside Oti Mabuse and the pair finished in joint second place.

Before signing up for the dance competition, the star had worked in musical theatre and also appeared in Hollyoaks.

In the same vein, Maisie had a small amount of dance training and appeared in soap EastEnders, she also finished runner up but did receive some backlash for having had dance experience before.

Speaking on This Morning, Maisie said at the time she “could be the dark horse” in the 2020 competition.

Phillip Schofield mentioned the fact she had already won Strictly thanks to a cha-cha with Kevin Clifton on the Children In Need special back in 2019.

But she replied: “That was an absolute fluke.

“I’m not going to lie, I’ve got dancing experience.

“I’ve done a bit of hip-hop and street dance throughout my time but I have no technical ability at all.

“So yeah I feel like I was very lucky on that week. But who knows, I could be the dark horse.”

Despite Maisie insisting her win was a “fluke” and she has zero “technical ability”, come viewers weren’t convinced.

One took to Twitter to rant: “I really like Maisie but not only is she professionally trained already, but she was also trained by Strictly professionals themselves for a Children in Need special.

“As is the case every year, some contestants are given a head start against the others and that isn’t fair.”

Another posted: “This year the professional dancers are the celebrity’s, definitely time for this show to end.”

Strictly Come Dancing is set to return to BBC One this coming Autumn.