Financial adviser Marshall Brentnall starts his day at 6am getting his children to school and day care.

After a half-hour commute from his Rozelle home, he arrives at a CBD office to manage a team of 13 and provide information to clients about how to organise their investments, mortgages and super. 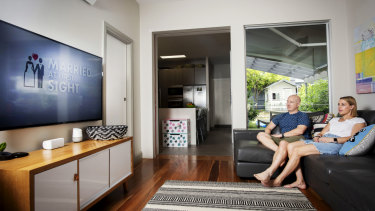 MAFS is no longer a dirty little secret, as new audiences get involved and the show becomes the water cooler chat of 2019.Credit:Christopher Pearce

But come 7.30pm, the 42-year-old director of financial service company Evalesco is one of the millions of Australians tuning in for their daily fix of Married at First Sight – and he's as surprised about it as anyone, with the show a far cry from his usual programs of choice.

"My typical television diet would consist of a balance between sports, Netflix and Sky News After Dark," he says. "But that routine has been disrupted by this program."

Last year's season of Married at First Sight drew an incredible 2.2 million viewers for its dramatic finale in March.

While many of those viewers will have returned for more drama this year, heavy advertising during the Australian Open – plus plenty of off-screen hype – has seen the new season, which kicked off at the end of January, attract some unlikely followers and first-time watchers.

And it's nothing for anyone to be ashamed about.

"You can now like highbrow and lowbrow, it’s all valid," says Beverley Wang, co-host of Stop Everything!, a weekly pop culture program on ABC's RN. 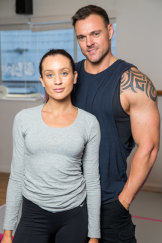 Controversial couple Ines and Bronson from Married at First Sight.

Wang says people are becoming more "open and honest" about what they like to watch and the show has become the ideal, non-political water cooler chat for 2019. "You can talk about sport, weather and now MAFS. These are safe places where we can have conversations," she says.

In Melbourne, musician Mitch Power says his ordinary television habits generally include watching comedy shows and documentaries on Netflix, but his partner recently convinced him to watch an episode of MAFS. Now, the 30-year-old says he's "hooked".

"I'm not into reality television but there's something about this one that keeps me coming back," Power says, also noting that he suspects other "musician dudes" have been "closet watching" the show because the weekly storylines keep cropping up in conversation at gigs.

"It's been interesting to see other musician friends of mine coming out of the woodwork and admitting to watching it too," he says.

Recently, he was booked to play guitar for a few bands at an indie-folk concert in Tasmania. After the show, he shared accommodation on King Island with another drummer and his wife. Turns out, they shared an interest.

"They were huge MAFS fans," Power says. "We were tucking into cheese and wine and Married at First Sight came up – we spent the next hour talking about it."

First-time reality show watcher Fran Pagdin says a big drawcard for watching the show is the communal discussion it brings about. She lives in Riverton, a small town north of Adelaide, and has joined an online group of "really fun women" who exchange commentary during each episode.

"The community is great, I must say. I really enjoy that group of people," says the retired mental health worker.

Her nightly television routine mostly consists of watching the news as opposed to high-drama reality TV. The 68-year-old became aware of Married at First Sight after reading recaps online.

"I’m a bit of a newsaholic. I was reading the papers online and I started to read a bit about this MAFS show and thought it was really intriguing," she says. But unrealistic plot lines and a dubious screening process for contestants – some of whom Pagdin says display symptoms of mental illness –has caused her to slowly turn the show off.

"After watching, I understand how people get gripped by it," she says. "But at the end of the day, the show says it's OK to be downright rude to each other."