Queen Elizabeth II is a monarch of many firsts. Not only did she contribute to the war effort in 1944, where she trained as a truck driver and mechanic, but she will also become the first British ruler to sit on the throne for 70 years, as of 2022. That’s quite a milestone! To mark the occasion, CNN reports that the whole of the United Kingdom will pay tribute to Her Royal Highness’ long reign with special events including Trooping the Color, a concert at Buckingham Palace, and a series of street parties. Per Town & Country, the Palace is currently seeking ideas for a Jubilee emblem via a design competition, with the winning design set to serve as “the official symbol of the 2022 celebrations.”

According to a statement from the Palace, “the events will provide an opportunity for communities and people to come together to celebrate the historic milestone.” The Palace also noted that royal family members will travel around the UK throughout 2022, to “carry out a wide variety of engagements,” per CNN. It’s sure to be a special year for the queen and her country — therefore, it warrants some reminiscing on Elizabeth’s incredible life and legacy. In honor of her upcoming Platinum Jubilee, let’s take a look back at another landmark occasion: her Diamond Jubilee. 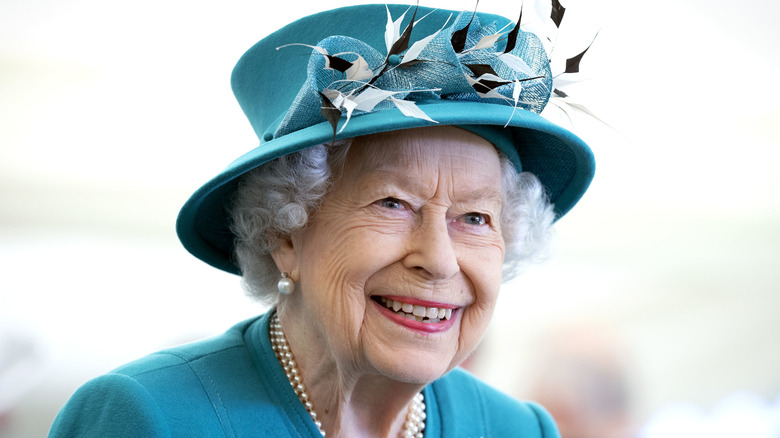 Queen Elizabeth II celebrated her Diamond Jubilee — or 60 years on the throne — in 2012, making her the only monarch to do so besides Queen Victoria. The queen therefore commemorated the day in style “with a dazzling flotilla of 1,000 ships down the Thames in a display of pageantry the likes of which have not been seen … in 350 years,” and which “brought in more than 1.2 million onlookers,” according to The Washington Post.

At the time, the once-in-a-lifetime event was said to showcase the popularity of the Windsors, which has since taken a hit after Prince Harry and Meghan Markle stepped down as working members of the royal family. However, the Diamond Jubilee was still key in “bringing people together, bringing people out into our communities, and helping us to get to know our neighbors better,” as ex-Prime Minister David Cameron told reporters (via The Washington Post). Another onlooker told the outlet that it was a day in which citizens were “proud to be British.”

Because it was only the second time the nation had marked a Diamond Jubilee, the all-out festivities featured a concert, the Coronation Cup horse race, and a carriage processional (via Boston). Queen Elizabeth’s upcoming Platinum Jubilee promises to be just as grand an affair, if not grander. Perhaps it will help to reinstate the royal family’s popularity, as well as pay tribute to the late Prince Philip.