Former president Donald Trump has been sparking headlines lately by making the rounds and speaking at rallies, prompting much discussion about the possibility of his run again in 2024. Even Senator Lindsey Graham, who has spoken against Trump, recently came forward to tell The New York Times that the businessman-turned-president could be “a unifying figure for Republicans to take back both houses of Congress.” He did, however, offer Trump a dire warning at the same time about needing to get over the 2020 election.

Trump seems to also see himself as a unifying force, so much so that he has not hidden away in Mar-a-Lago, Florida, but instead appears to be busy all over the country. On August 21, Trump spoke to a crowd in Cullman, Alabama, according to Newsweek. He didn’t have great things to say about President Joe Biden, but he did have something to say about the coronavirus and the crowd actually booed him. Here’s what went down. 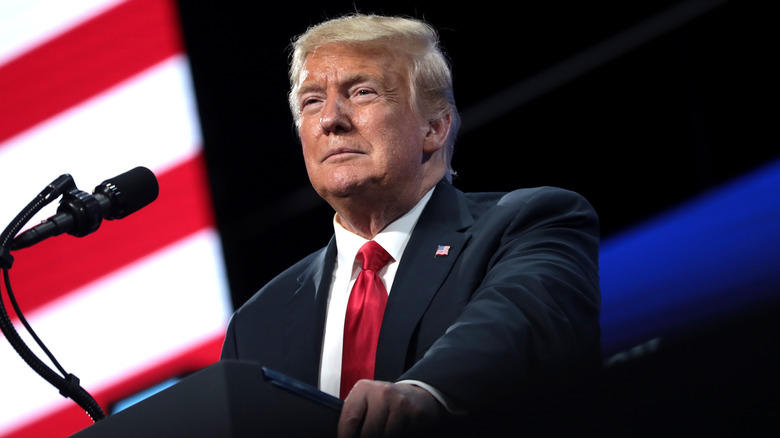 Former President Donald Trump addressed the Alabama crowd by offering a little dig at President Joe Biden and the current situation with the coronavirus. He claimed that Biden was failing at stopping the spread and added, according to Fox News, “Could you imagine if I were president and the virus was surging back?”

However, Trump did tell his supporters to get vaccinated. “I believe totally in your freedoms, I do, you gotta do what you gotta do, but I recommend take the vaccines. I did it. It’s good,” Trump said, per Newsweek. The crowd booed in response. Trump didn’t seem bothered by their disdain for his message and went on: “That’s okay, that’s alright,” he continued, brushing off the disapproval. “But I happen to take the vaccine. If it doesn’t work, you’ll be the first to know. But it is working. You do have your freedoms, you have to maintain that.”

This clearly wasn’t what the audience wanted to hear and TMZ went so far as to say that the crowd “turned” on Trump. The endorsement of the vaccine marks a potentially surprising turn from some of the previous misinformation spread by Trump and other members of the Republican party about the virus and the vaccine. Keep reading.

The Republican party is endorsing the vaccine 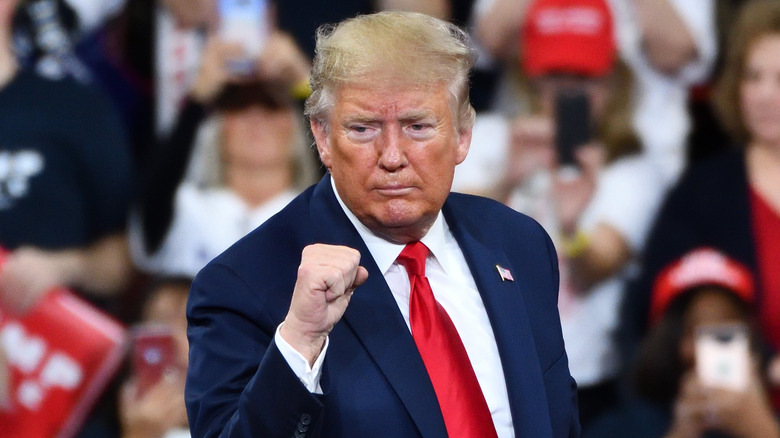 The Republican party, Donald Trump included, had previously received criticism for their misinformation spread both about the pandemic and the COVID-19 vaccine. As Newsweek notes, many Republicans spread an “anti-COVID-19 lockdowns, masks and vaccine sentiment” when the pandemic first began.

However, this has changed. As The Washington Post notes “a growing number of Republican elected officials have finally begun publicly promoting vaccination.” This list includes Gov. Ron DeSantis of Florida and Louisiana’s Rep. Steve Scalise. Even Sean Hannity of Fox News has endorsed the vaccine. “Please take Covid seriously. I can’t say it enough. Enough people have died. We don’t need any more death,” Hannity said, according to NBC News.

While the coronavirus goes beyond a partisan issue, The Washington Post notes that endorsements from one’s own party leaders can have a huge influence. The outlet reported that “that unvaccinated Republicans presented with Republican elite encouragement were more likely to report that they thought Trump and other Republicans would want them to get vaccinated, and this view was associated with their increased vaccine intentions.” So Trump’s endorsement of the vaccine at his Alabama rally may mark a huge step forward.