Queen Elizabeth has made two appearances this weekend to commemorate Remembrance Day, and pay tribute to all of the military personnel who have lost their lives to war. On Sunday, the queen joined Kate Middleton, Prince William, and Prince Charles at the Cenotaph in London for the annual Remembrance Day Service. And on Saturday, the monarch attended a private ceremony at Westminster Abbey to pay her respects at the grave of the Unknown Warrior on the 100th anniversary of the burial.

Per a press release, “As part of the ceremony, a bouquet of flowers featuring orchids and myrtle—based on Her Majesty’s own wedding bouquet from 1947—was placed on the grave of the Unknown Warrior in an act of remembrance. The gesture reflected the custom of Royal bridal bouquets being placed on the grave, a tradition which began in 1923 when Lady Elizabeth Bowes-Lyon, the future Queen Elizabeth The Queen Mother, laid her bouquet as she entered the Abbey in memory of her brother Fergus, who was killed at the Battle of Loos in 1915.”

In subsequent years, royal brides have traditionally placed their bouquets on the Unknown Warrior’s resting place. The Queen Mother’s funeral bouquet was also placed there, per her request. 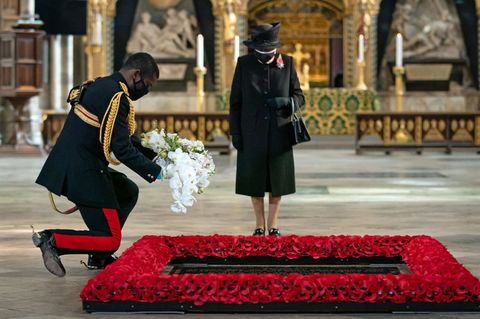 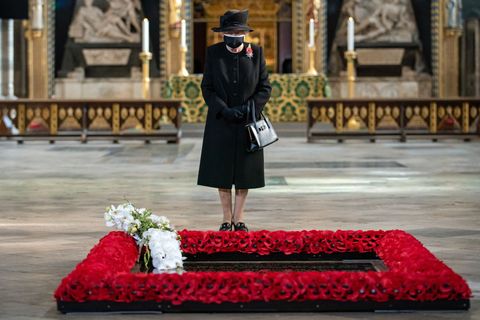 The press release continued, “The grave of the Unknown Warrior is the final resting place of an unidentified British serviceman who died on the battlefields during the First World War. The serviceman’s body was brought from Northern France and buried at Westminster Abbey on 11th November 1920 after a procession through Whitehall.” Since then, the Unknown Warrior has become an important symbol to represent fallen troops and military personnel.