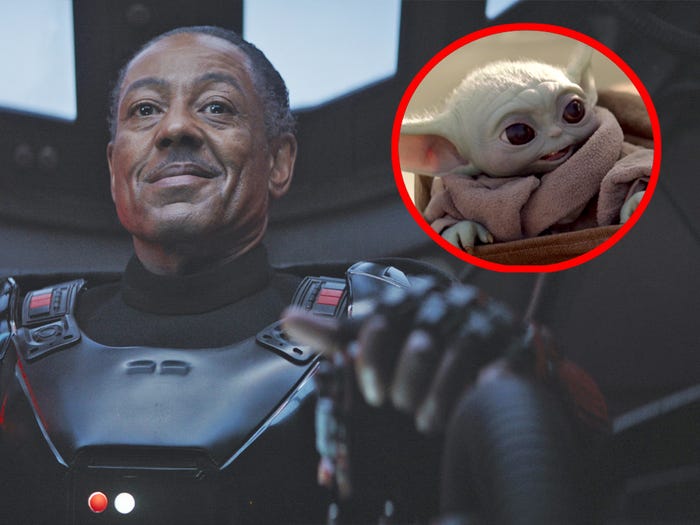 So far in Disney Plus' first live-action "Star Wars" series, "The Mandalorian," the biggest mystery plaguing fans is the origin and nature of the Child — known fondly as "Baby Yoda." Though the Child isn't literally a younger Yoda, its species name, personal name, and home planet are all still a mystery.

And "Mandalorian" star Giancarlo Esposito said recently that he'd rather keep the gender of the Child unknown for now, too.

During an interview with Insider, Esposito referred to the Child as "he or she." When asked if the little being had a confirmed gender in the show yet (since the Mandalorian bounty hunter calls the character "him" a few times), the actor said, "Well, I don't want to know."

"I like to think that the gender of this Child far surpasses the boundaries and limitations of how we see and feel gender in our society," he explained.

"I say 'he or she' because we're in a new world [and] I'd like to give that equality," Esposito continued. "I have four daughters and I feel like they're going to move the consciousness of the planet forward because of their gender. We haven't experienced that in our world yet. It's been…little small steps for women."

"I believe women have a spiritual wisdom inside them, along with compassion, that will change how we see each other," the actor added. "The possibility of that could be great."

Esposito, who plays Moff Gideon in the Disney Plus series, said he "could be completely wrong" because "The Mandalorian" showrunners Jon Favreau and Dave Filoni might have "said something else."

Indeed, Favreau refers to the Child as he/him in interviews and, as we already mentioned, some characters in the show itself refer to the Child using he/him pronouns on several occasions. It's worth noting, however, that simply because someone uses he/him pronouns doesn't necessarily mean they identify as male since pronouns aren't tied to someone's gender identity.

But even with those examples, Esposito told Insider he has a personal preference for being inclusive regarding the Child's possible gender identity.

"I always like to leave that in my brain as an option," he said. "That's just my take on it. We as human beings are conditioned in many ways. We're conditioned by the society in which we live and the thought form which we adhere to whether we know it or not. I just want to try to open it up and think, 'Oh, it could be something else.'"

If there's one day Esposito will never forget, it's the first time he saw the Child on the set of "The Mandalorian."

"I walked by the Child, which is normally kept in a shaded area covered off, and they happened to be, you know, 'waking the baby up,'" he recalled. "I just stopped in my tracks because this Child was absolutely so captivating and so wonderful."

The small being has been central to many people's experiences on the show, including many of the behind-the-scenes crew. The show's musical composer, Ludwig Göransson, told Insider back in August that he was amazed to see how similar the Child was to his own newborn son.

Esposito echoed this awe, saying that the Child fely like a "very human character."

"The Child has an element of curiosity, wonder, intelligence, power, calm, peace … all of these things that I think so many of us would [want] and that I would love to have inside of me," Esposito said with a laugh. "So when I first saw this Child, I started talking to it. I had a conversation [with it]. You can't walk by the Child without having some kind of interaction."

"The Mandalorian" season two continues this Friday on Disney Plus with "Chapter 13."

Holly Willoughby’s marriage to Daniel Baldwin will ‘grow from strength to strength’ despite her busy year ahead
We and our partners use cookies on this site to improve our service, perform analytics, personalize advertising, measure advertising performance, and remember website preferences.Ok