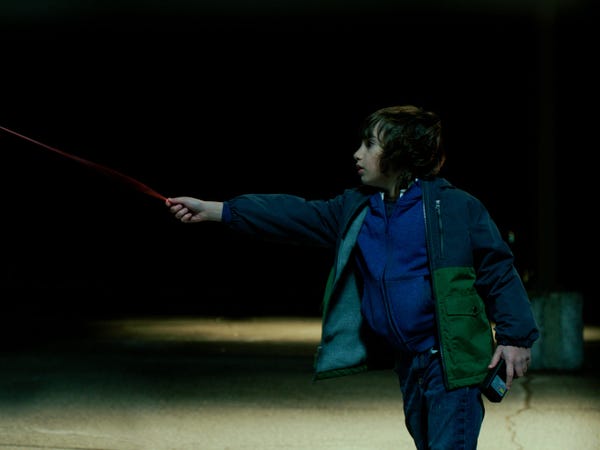 Set in the underwater town of Bikini Bottom, the series follows a happy-go-lucky yellow sea sponge, who works as a fry cook at the fast-food restaurant. He also gets caught up in the antics of his friends — pink starfish Patrick Star, the clarinet-loving Squidward Tentacles, and the fast-talking squirrel Sandy Cheeks.

But from the opening moments of horror movie "Come Play," which features the plucky animated sponge quite a bit, it becomes clear that in this context, "Spongebob" is so much more than a means of wholesome entertainment.

Oliver (Azhy Robertson), the protagonist of "Come Play," is a young boy with autism who absolutely loves "Spongebob." He lives with his mother and father (Gillian Jacobs and John Gallagher Jr.), whose relationship is quite strained. Coupled with the fact that Oliver is nonverbal and solely communicates via an app on his phone, the family dynamics in the home are complicated, to say the least.

Thankfully, however, Oliver is able to escape to the world of "Spongebob" often, streaming the show on his iPad or phone. At times, he even hums the show's theme song in order to calm himself down. But unfortunately, a terrifying monster named Larry exists behind the screens of his devices.

The subject of an e-book called "Misunderstood Monsters," Larry is only able to come to life when someone reads and finishes his story. But with Oliver growing increasingly isolated from family and classmates, Larry soon begins terrorizing Oliver and his family.

Chase, who also wrote the film's script, told Insider that it was no accident that the film features "Spongebob" so prominently.

"It started honestly from research and learning how many of these kids found TV shows that they really connected to, that they'd watch over and over," the director explained. "It became interesting to watch how parents would communicate with their kids using these shows sometimes."

For Oliver, "Spongebob" isn't just a means of escape — he also uses it to communicate. In one scene, trying to make amends with a classmate, Oliver plays a clip of Squidward attempting to apologize to Spongebob. And during a pivotal moment towards the end of "Come Play," Oliver's mother hums the "Spongebob" theme song in order to calm him down.

"I love 'SpongeBob' myself as well, but it's very popular within the autism community," Chase said. "At the same time, I see a lot of Oliver in SpongeBob. I mean, they both are very well-meaning people. They both see the best in those around them.

Chase also revealed that he and Robertson, who plays Oliver, "did so much research and homework" to prepare for the film, including shadowing kids on the spectrum.

The director added that it was important for Robertson to surround himself "with all of these amazing kids on the spectrum, and families, and speech therapists. We really tried to go above and beyond to make [Robertson] feel comfortable and to make the character feel real."

Chase also received direct feedback from a person on the spectrum, who was once non-verbal.

"There's this young man named Sam, who's on the autism spectrum, and who was actually non-verbal when he was Oliver's age," Chase said. "And I had him read the script and give me notes and stuff. So we really tried to make it feel as authentic and sensitive as possible."

The film doesn't shy away from showing the more challenging parts of Oliver's disorder. When Oliver's mother invites a group of his classmates over to their home for a sleepover, an overwhelmed Oliver moans and rubs his knuckles together in order to soothe himself. And during Larry's attacks on his family, Oliver is unable to remain quiet, often humming a few bars of the theme song to "Spongebob."

'Come Play' was developed from Chase's short film, 'Larry,' but Oliver was inspired by Chase's wife's work in the autism community

While "Come Play" features a much more complex storyline, some elements (and one desolate setting) have carried over from Chase's previous work. In his 2017 short film, "Larry," the director found his villain.

"It kind of introduced the idea of this Larry monster, the fact that he wants a friend, but not much else. And so really it was starting from the ground up with the feature film," he explained. "When I was expanding the character of Larry and what he could do, and how he reaches you, it became clear that the most interesting people for this to affect are people that really need this technology to help them communicate with each other."

According to Chase, he'd been wanting to tell a story about a "young kid on the autism spectrum who's non-verbal."

"My wife works with kids on the spectrum. So I had sort of had a window into this world for a few years, and had really grown to love the community and understand so much about the people that are part of it," he told Insider.

"So really it was marrying those two ideas together in this perfect way of like, people who need technology to communicate, and a monster that is trying to take over your technology and get you."

Chase said that they auditioned numerous children who were autistic, but ended up choosing Robertson, who isn't on the spectrum

For Chase, it was important to the director that he not only represented the autism community in his script with an accurate portrayal, but he also wanted to cast an actor who also lived with the disorder. But the task wasn't easy.

"Very early on in the casting process, we saw a bunch of kids on the spectrum," Chase explained, noting that the actors ranged from neurologically atypical and typical. Ultimately, though, they decided to go with Robertson, who'd been recommended to Chase by Stephen Spielberg.

"I think once you work with Azhy and you see his performance and how in touch he is, with being able to access those tears and that emotion, it just became so clear that he was the amazing young actor for this role," Chase said. "It was just hard to say no to him."

For Chase, it was Robertson's depth of feeling and commitment that made him the perfect fit for the role.

"He has so much empathy for people that aren't exactly like him. And that was really important when looking for the actor," Chase said. "Oliver is a character who is so well-meaning. He believes in the best in people, he has no guile. He's got so much more to him."

Throughout the film, Oliver reaches several developmental milestones — all while trying to protect his family and friends from Larry

Chase told Insider that ultimately he didn't want to lose sight of the fact that "Come Play" is, at its core, a horror film.

As Larry grows stronger, he increases his attacks on Oliver and his family, cornering Oliver's dad in an empty parking lot, and even choking one of Oliver's friends. But despite the terror taking over his life, Oliver is actually able to become closer to his parents.

"In a horror movie, you want people to be terrified and you want these characters to be going through these really sort of horrible experiences," Chase explained. "You always feel bad as a writer, what you're doing to these characters. But at the same time, this situation, this experience is ultimately what's bringing this family together, admittedly in a sort of messed up way."

Chase was also adamant that it's not a movie "about" autism, despite centering a character with the disorder.

"Oliver being autistic is something that came about because of my experience with the community," Chase said. "I really wanted to have a movie with a character at the center who has autism, but it's not a movie about him having autism. That's just one of the many facets of who he is and what the movie is [about]."

"Come Play" premieres in theaters Friday. Watch the trailer below.