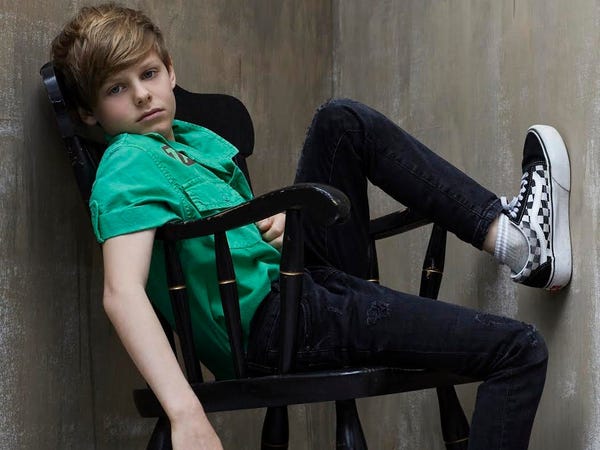 Cameron Crovetti is known for his roles on shows like "The Boys," "Big Little Lies," and "Dirty John."

The 12-year-old actor, who plays Ryan on Amazon's "The Boys," answered some rapid-fire questions for Insider about the scene he's most proud of from season two, his dream projects in Hollywood, the piece of advice his costar gave him, and more.

Who do you admire most in your field?

I admire James Wan because I love horror films and he executes his films in such an incredible way.

What's a book you think everyone should read?

"The Body" by Stephen King.

Dream job or project in Hollywood?

I would love to be a director one day. As an actor, I love telling the story through the eyes of my character, but being a director I would get the chance to tell the entire story.

Who's your most listened to artist on Spotify?

The Eagles. I am playing a lot of guitar now and The Eagles is really fun to play on the guitar.

What's the best present you've ever given someone?

For my mom's birthday, she said she did not want any gifts. She said to just make her a funny video, since we are always making short videos. So my siblings and I got together and made a funny version of "Nailed It!"

Dream collaborator or person you wish to work with?

I would love to work with the showrunners of "Game of Thrones," D. B. Weiss and David Benioff.

During COVID I watched the entire series with my mom and twin [Nicholas Crovetti]. My mom fast-forwarded through a lot, which made Nick and I mad, but we loved the show. I heard they're doing a prequel and I would love to play a real evil character like Joffrey.

Is there a fictional character you relate to?

Sokka from "Avatar: The Last Airbender."

What is one of your favorite phrases or quotes?

"Keep your friends close, but your enemies closer" [from "The Godfather: Part II"] or "Life moves pretty fast. If you don't stop and look around once in a while, you could miss it" [from "Ferris Bueller's Day Off"].

Have you ever been starstruck? Who was it and what happened?

I have never been starstruck by actors because I have been around them since I was really little. Both my parents and sister are in the business.

However, when I went to the "Aquaman" premiere I was so nervous to meet James Wan. He is the only person I asked our PR agent to introduce me to. When we met him, he was so nice and cool. He couldn't believe I watched almost all his films because a lot of them are so scary.

If you're going to be stranded on an island with one person, who would they be?

Which scene from season two of "The Boys" are you most proud of?

I would have to say the scene that I am proudest of is the scene where Ryan kills his mom by accident.

Butcher wakes up to see Ryan in shock, staring at his mom and then realizing what he has done. It was one of the most challenging scenes I have done to date. I did a lot of prep work for this scene before filming as well as right before we shot. I think we got my coverage in two takes. I was really proud of that.

Which scene from season two was the most challenging to film?

It would be the scene I was most proud of. It was challenging because as an actor, I had to go to a very dark and emotional place.

The crew was very respectful of my process and left my mom and I alone to prepare while they were setting up the shot. My mom and I went to a nearby tree and sat quietly in that place of sadness and despair. So when the director yelled "rolling," I was able to step onto my mark and do my thing.

At what point were you told about Ryan's storyline this season and what was your reaction?

Going into "The Boys," all I knew was that I was the son of Homelander and when I auditioned for the role, the sides I was given was the scene where Homelander threw me off the roof.

I was cast off my audition tape. So that is literally all I knew. Homelander was my dad and he was trying to, in a really inappropriate way, bond with me.

I didn't learn about the rest of my storyline until I got the new script for that week of filming.

When I got the script for the season finale and I learned that I killed Stormfront and my mom, I was very sad. Shantel [VanSanten, who stars as Becca Butcher] and I had bonded over the season. The scene where I killed her, I was truly grounded in my sadness because I knew she was not coming back.

How do you think people are going to feel about Ryan by the time they see the season two finale?

Hopefully sadness for this character. He lived such a sheltered life and his mom was his whole world. I also hope fans have fear for Ryan, he could end up like Homelander. Homelander was also a sweet boy when he was little and the system changed him.

Is there a behind-the-scenes detail about the making of the show that fans would be surprised to learn?

Yes, so my twin and I sometimes try out for the same parts. Sometimes he gets the projects over me and vice versa. I ended up getting the part of Ryan and Nick always razzes me about that.

One day when we were shooting the big "fall off the roof shot," we ran out of my time allowed on set. One of the producers came down to the green room and said to my mom, "He has a twin?" My mom laughed and said yes.

Nick also tried out for the role of Ryan and we are also the twins from "Big Little Lies." The producer said he had no clue I had a twin and asked if Nick wouldn't mind being my stand-in.

Nick was cool just to fly to Toronto and hang with me on set. He left his ego at the door and was my stand-in for some shots. He had just wrapped a film that he got over me that shot in Belgium, so he was available.

If you look closely in the scene where I fall from the roof, the shot of me from the roof laying on the ground is really Nick. Also, several shots of me running through the woods from behind is Nick.

We totally have fun picking on each other that Nick is my stand-in, and he picks on me saying he still gets to be in the show and meet the cast. But it really is fun to have my best friend to hang out with on the set.

Have any of your costars given you advice? If so, who was it and what did they share?

When I met Karl [Urban, who plays Billy Butcher] for the first time in the hair and makeup trailer he said to me in so many words that acting is a marathon and not a sprint.

Battle of Trafalgar cannon to go under the hammer for £12,000
LIFESTYLE