John Malkovich outraged Agatha Christie fans as Poirot with a GREY GOATEE – instead of his trademark moustache. The acting and his battle of wits with the killer mattered more in The ABC Murders, by Jim Shelley

The ABC Murders featured supposedly the most appalling crime ever seen in all the Agatha Christie films and TV dramas through the years. More shocking than any of her surprisingly violent, brilliantly twisted, killings.

Sacrilege! At least as far as crime fiction/Christie purists were concerned. 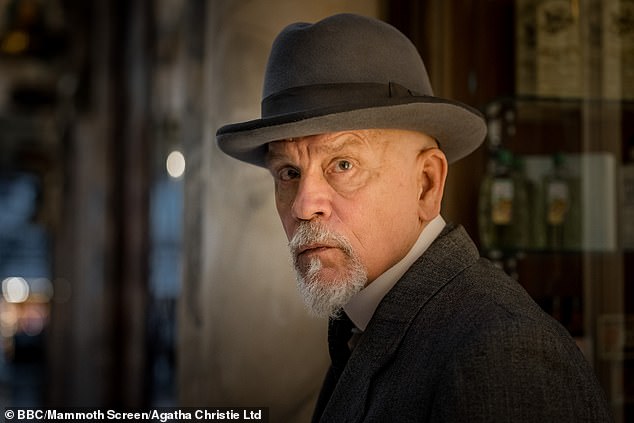 Shocking: The ABC Murders featured supposedly the most appalling crime ever seen in all the Agatha Christie films and TV dramas through the years

Their pain was compounded when instead the legendary detective appeared sporting a grey goatee!

They must have deduced that the prospect of John Malkovich playing the hero, aided and abetted by scriptwriter Sarah Phelps would mean trouble.

In her previous adaptation for the BBC earlier this year, Phelps had changed the denouement of Ordeal By Innocence so that Christie’s mystery had a different culprit to the one conceived by the undisputed Queen of the genre herself.

(Their outrage at her audacity grew when the former EastEnders’ writer revealed she hadn’t read any of Christie’s novels until recently or watched the TV dramas, preferring ‘Masterchef or Nigella.’)

As for John Malkovich, the Hollywood maverick (the star of hit movies Con Air, The Man In The Iron Mask, etc) is notorious for his aversion to convention and penchant for conveying characters via extravagantly unorthodox touches/flourishes.

In his break-out film Dangerous Liaisons (set in 1790s’ Paris) playing the incorrigible seducer Valmont, Malkovich exited one scene with a moon-walk.

So while the purists were bridling about Poirot’s goatee, the rest of us just gave a Gallic shrug (or the Belgian equivalent anyway) and enjoyed The ABC Murders as a typically chilling, gripping, grisly, piece of Christie Grand Guignol with a certain je ne sais quoi.

Still drama filled: Apart from the fact that, call me crazy, it was only a moustache (or not), Poirot’s goatee made a change if nothing else

This was of course down to Malkovich who played Poirot as, well, a Belgian version of John Malkovich mostly: gliding around the streets of 1930s England, exuding an elegant, intelligent, authority and sporting a goatee not wildly unlike his own!

Apart from the fact that, call me crazy, it was only a moustache (or not), Poirot’s goatee made a change if nothing else.

After 487 ITV dramas the sight of David Suchet’s Poirot waddling about like a cross between a penguin and Humpty-Dumpty had become a cliché and just really irritating.

Malkovich’s Poirot was never less than entertaining (or ‘interesting’), although Poirot’s characteristically awkward accent wandered around Europe at times.

The word ‘weapon’ was mangled into ‘way-purn’ and his pledge to the killer’s victims came out as the promise to ‘find zis pair-son. I give you my solemn wurd.’ 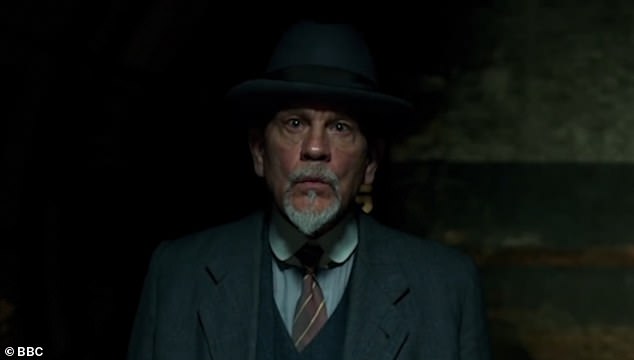 Sacrilege! Hercule Poirot being portrayed without his trademark, dye-black, twiddly moustache. Sacrilege! At least as far as crime fiction/Christie purists were concerned

Then again this could be how the Belgians speak for all we know, or how Poirot would.

It didn’t take long for sensible viewers to stop worrying about Poirot’s moustache and become rapt by the genius of Christie’s storytelling: approximately 10 seconds of the opening credits.

‘Are you lonely?’ the close-up of a typewriter hammered out. ‘Don’t be lonely. I am here. Watching you. Chin-chin. A.B.C.’

Agatha Christie is so popular it’s easy to forget she was such a sicko. What followed, with the atmosphere and the music in particular was more like Luther than the cosy ITV series.

The author of the letter was Alexander Bonaparte Cust, a thin, fish-faced, figure in a brown mackintosh whose pallor made him look not so much like a killer but a corpse. (An excellent performance by Eamon Farren resembling Rodney Trotter inhabited by the sadistic, psychotic, spirit of Pinkie in Brighton Rock.)

He entered the scene in slow motion, head bowed, hidden by his Homberg hat as Cust’s voice read: ‘I followed you the other day. You looked old and tired. You walk as if your feet hurt. I was rather concerned for you. I stood so close behind you. Could you feel my breath on your neck Hercule?’ 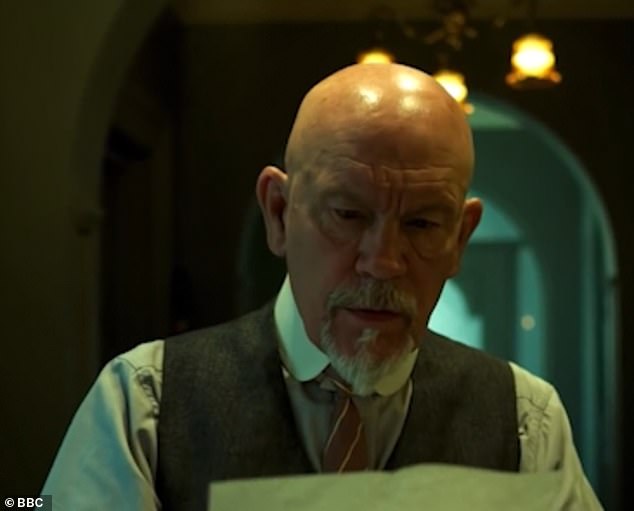 Mixing things up: Apart from the fact that, call me crazy, it was only a moustache (or not), Poirot’s goatee made a change if nothing else

Malkovich turned to reveal for the first time that sharp gaze and stylish grey goatee.

It didn’t take long – or take much – for the Hollywood maverick to dispel any idea of his Poirot being portrayed like Suchet’s facile, supposedly ‘comical’, caricature.

Instead, when we came to the Belgian’s penchant for dying his facial hair Malkovich used it to evoke pathos, treating Poirot more as a tragic fool than a figure of fun.

His black ink dripped into the sink as Cust’s voice-over commented: ‘plenty will say that it’s vanity. That puffed-up pompous peacock Poirot, they’ll say. They’ll laugh at you behind your back. But I’m not laughing. I think you’re trying to roll back time to when you were a famous detective. When you were wanted. When you were loved. I have never been loved. But I will be feared. I will be a faceless beast, leading lambs to the slaughter.’

And so we were hooked and their deadly dance began. Poirot soon found he was – as ever – an outcast. The new, younger, officers at Scotland Yard mocked both Poirot’s reputation and its decline into celebrity.

He had become reduced to hosting murder parties for society figures and tourists – ‘playing at death’, as Inspector Crome (Rupert Grint) scoffed. 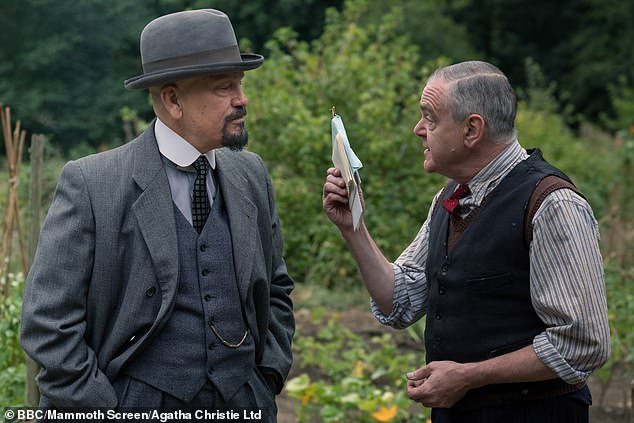 Caricature: It didn’t take long – or take much – for the Hollywood maverick to dispel any idea of his Poirot being portrayed like Suchet’s facile, supposedly ‘comical’, caricature

Crome dismissed his concerns about Cust’s letters because of the apparent lack of action accompanying them.

‘No corpse in the library?’ he jeered. ‘No silver candlestick rammed into some heiress’ eye socket?’

It all forced Poirot, inevitably, into solving the case himself after Cust’s next letter read: ‘I’m excited. I’m all of a dither. I’m ready. I hope you’re ready too. 31st March. Andover. IT BEGINS.’

Poirot found Alice Asher of Andover with her throat cut and her head nearly severed, lying next to a bloody page from The ABC Railway Guide, shortly after Cust had visited her shop in the guise of a salesman selling ladies’ stockings.

‘Hello Hercule, what did you think of Mrs Asher?’ Cust wrote in his next letter. ‘She made a terrible mess. You know what’s next? B. But which B? Chin-chin. ABC.’

Betty Barnaby, a flirtatious waitress from Bexhill, was promptly found with Page B from the ABC Railway Guide and stockings tied round her neck.

‘Betty was a pretty girl wasn’t she?’ Cust’s next missive mused cruelly. ‘There was a moment when she realised that death was waiting with open arms. She surrendered to me, and I leaned over her and inhaled her last breath. I felt my blood sing with its sweetness. I’m tired. So we’ll have a little rest and we’ll pick up where we left off. Chin-chin’ 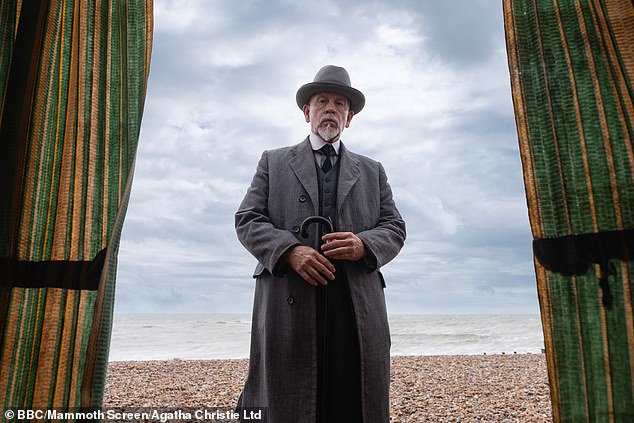 Shocking: Poirot found Alice Asher of Andover with her throat cut and her head nearly severed, lying next to a bloody page from The ABC Railway Guide

Part One ended with Poirot being persecuted not just by the killer but Inspector Crome who raided his home, seizing what he called the ‘fan letters’ from Cust.

Crome also eventually revealed the reason for Scotland Yard’s antipathy, and the under-current of racism/xenophobia directed at Poirot that (in the years to come after 1933) would mutate and surface in support for Hitler or Tommy Robinson today.

‘People don’t like it when the Force are made to look like half-wits by a foreigner!’ Crome snarled at Poirot. ‘It’s out of step with the public mood.’

It transpired Crome’s predecessor at Scotland Yard, Inspector Japp had banked his reputation on Poirot’s credentials and lost.

So although Crome was now taking the letters seriously he refused to let Poirot assist in the case.

‘Don’t visit any more crime scenes!’ he ordered him.

‘You will not catch ABC without me!’ roared Poirot with a passion Suchet certainly never mustered. ‘I gave my word to the dead inspector. I cannot abandon them. I must not.’

‘Your word is worthless! You’re not who you say you are! Who the hell are you!’ stormed Crome. ‘You were looked into. No-one had ever heard your name. There’s no record of Hercule Poirot registered with the Belgium police before 1914!’

We had already seen the childhood memories that still plagued Poirot.

‘You are lucky that you never lived through an invasion,’ he told the Inspector quietly. ‘Things are burned. Buildings, people, records…Turned to ash.’

So OK, yes sure Poirot had a goatee. But thanks to John Malkovich he also finally had some gravitas. 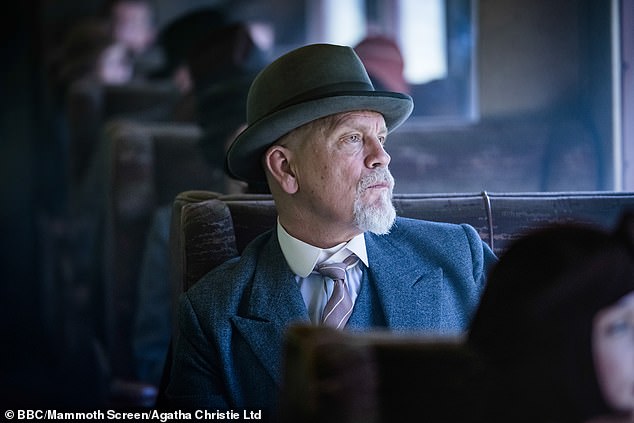 Persecuted: Part One ended with Poirot being persecuted not just by the killer but Inspector Crome who raided his home, seizing what he called the ‘fan letters’ from Cust