Not all ghost-infested mansions are the same, and The Haunting of Bly Manor proves that by telling a familiar but completely different story from its predecessor, The Haunting of Hill House. After the doors to Hill House first opened in 2018, fans were surprised when showrunner Mike Flanagan announced the series would be an anthology rather than continue the first season’s story, leading everyone to wonder how the follow-up would be different. Ahead of the new season’s Netflix premiere on Oct. 9, one of Bly Manor‘s stars is giving hints about what fans can expect. Tahirah Sharif’s comparison of The Haunting of Bly Manor to Hill House points out some notable similarities, but also some pretty major differences between the two ghost stories.

A newcomer to the Haunting franchise, Sharif plays Rebecca Jessel, an ambitious young woman who takes a nannying job at Bly Manor. With a whole slate of familiar faces returning from Hill House, the addition of Sharif to the cast is one of the most notable differences between the first and second seasons. But being new wasn’t a disadvantage for Sharif; she leaned on her co-stars to learn how to capture the creepy-yet-emotional Haunting vibe fans have come to love.

"I worked fairly closely with Oliver Jackson-Cohen," Sharif tells Elite Daily. "It was actually really helpful to work with someone who’d done the first season, because any time I was struggling doing any type of character work, he’d be like, ‘Feel free to make it your own and make the character as authentic as possible, because that’s what’s going to sell it at the end of the day.’"

Jackson-Cohen’s advice helped Sharif tap into the nuances of Rebecca Jessel. "Nobody wants to watch a two-dimensional character; people want to see what exactly makes Rebecca tick," Sharif says. "Sometimes, even though the viewers don’t get to necessarily see or hear the work you’ve done on this character, it all kind of trickles through the performance." 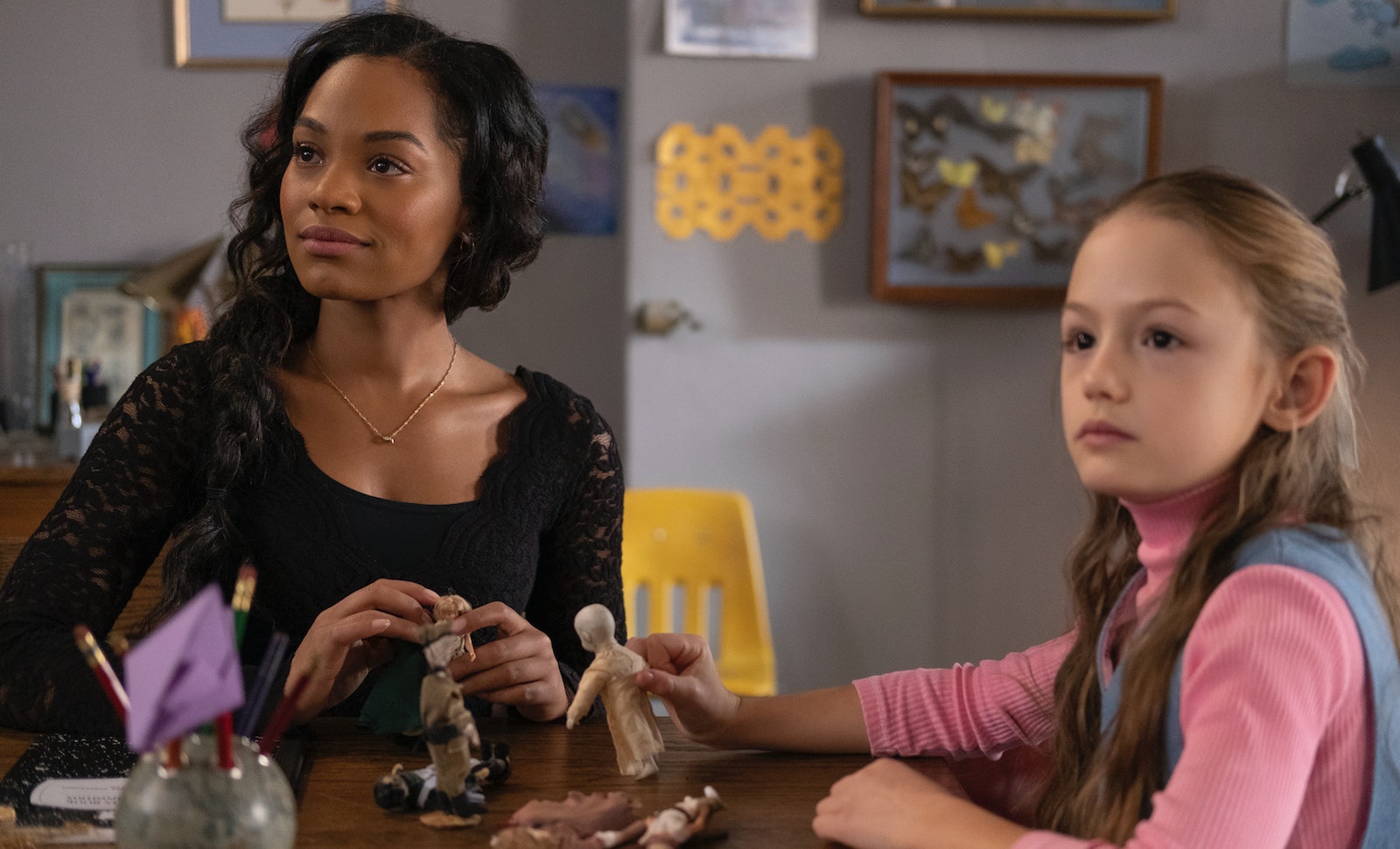 It’s not only the characters who are new in Bly Manor, but also the nature of the show’s central relationships. Rather than focusing on the tension among a biological family, the new season is comprised of unrelated domestic workers raising a pair of orphans. But, Sharif points out, there’s still an intense family dynamic that’s very reminiscent of the first season.

The similarities between the two seasons don’t stop there. "Then you obviously have the supernatural element as well," Sharif says. "And the tone is very similar, and the style in which the stories are told, where you are given information in the first episode and then it’s kind of drip-fed and revealed throughout the series. So you really get to find out a lot more about each resident living in Bly Manor."

While Bly Manor is a clear echo of Hill House in terms of the vibe and the storytelling, Sharif says the new season is distinct in every other way. "It’s a completely different story," Sharif says. "This one’s set in England; it’s set in the ‘80s with all different characters. And it’s based on a completely different novel." While Season 1 was based on Shirley Jackson’s 1959 novel The Haunting of Hill House, the new season is based on a collection of short stories by Henry James — mostly his 1898 novella The Turn of the Screw, but the series also adapts 1908’s The Jolly Corner and 1868’s The Romance of Certain Old Clothes.

Rebecca Jessel is looking forward to meeting you. • @thehaunting of Bly Manor welcomes you on October 9th • #thehauntingofblymanor #netflix

Rebecca Jessel is looking forward to meeting you. • @thehaunting of Bly Manor welcomes you on October 9th • #thehauntingofblymanor #netflix

The new story also puts a different twist on one of the fan-favorite elements from Hill House. In Season 1, viewers loved looking out for the ghosts hidden in several scenes of Hill House, and that creepy search-and-find takes on a new meaning in Bly Manor.

"In most of the scenes, there are hidden ghosts to look out for, much like in Hill House," Sharif reveals. "The main difference with Bly Manor, though, is that the ghosts hidden in Bly Manor all mean something to the story. They’re there for a reason; they’re not there by accident. It all incorporates into the story."

With this new bit of information, fans will spend more time than ever hunting down the hidden ghosts once The Haunting of Bly Manor hits Netflix on Friday, Oct. 9. But don’t forget to soak in the new story, because Sharif promises it will be packed with emotion: "There’s loss, there’s love, there’s grief, there’s betrayal, there’s all of these elements I hope people can really buy into and get invested in … There’s a lot of scary stuff, a lot of creepy stuff, and visually, it’s going to be really exciting."