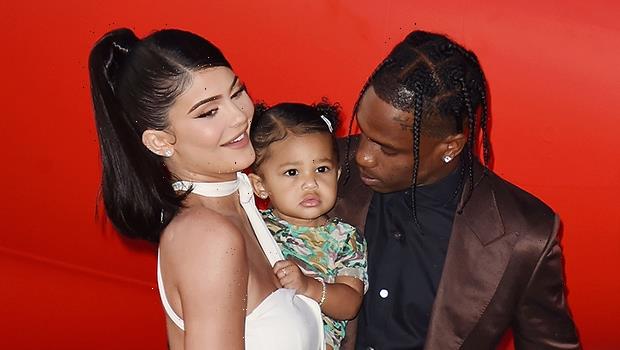 Travis Scott shared a snap of daughter Stormi looking adorable in her Gucci gear. It was one of his first posts since he returned to social media following the Astroworld tragedy.

She’s ready for the runway! Stormi Webster looked adorable rocking a stylish Gucci coat in a snap shared by her father Travis Scott. Taking to his Instagram Story on the very first day of 2022, the “Escape Plan” rapper posted the too-cute pic (below) of his 3-year-old baby girl he shares with Kylie Jenner, who is pregnant with their second child and due any day. In the photo, Stormi is smiling as she donned a maroon visor and black leather boots to complete her super chic ensemble!

Stormi is certainly ready for her close-up, as the post comes hours after she crashed her grandmother Kris Jenner’s virtual interview for The CNN countdown to New Year’s Eve show hosted by Andy Cohen and Anderson Cooper. As soon as Kris was asked about her daughter Kim Kardashian’s budding romance with Pete Davidson, Stormi barged in, sat on Kris’ lap, delighted the audience with her cute expressions and allowed the matriarch to dodge the question temporarily. What timing, Stormi!

Meanwhile, Travis’ post was one of his first since he returned to social media after he took an extended absence following the tragedy at his Astroworld festival, which occurred in Texas on November 5, 2021 and resulted in 10 casualties and 100’s of injuries of fans who got crushed by a crowd surge. The first share since his radio silence came on New Year’s Eve with a black and white profile pic of the entertainer and the caption, “Always,” with a heart emoji.

On the same day, Kylie also returned to her favorite platform following an extended absence. Other than a sweet throwback Christmas snap of her mom on Dec. 24, the makeup mogul had not posted since the tragedy. With her return, Kyle shared a profile photo showing off her growing baby bump. She captioned it, “As 2022 is approaching i’ve been reflecting on this last year and the blessings that it brought but also the many heartaches it held. i will never forget this year and all the significant changes it made to my life. I pray this new year is filled with a lot of love for all of you and i hope everyone stays safe and healthy during this time.”