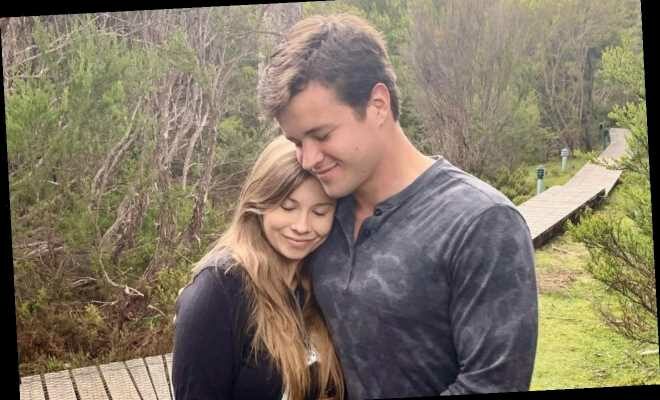 The daughter of the late Crocodile Hunter and her husband Chandler Powell recreate her parents Steve and Terri Irwin’s pose as she flaunts her huge baby bump.

AceShowbiz –Bindi Irwin and Chandler Powell have a unique way to honor her parents. Five months after going public with news of her pregnancy, Steve Irwin‘s daughter and her husband recreated the pose the late conservationist and his wife Terri Irwin did in a maternity photoshoot, and shared it on social media.

On Thursday, January 14, the 22-year-old expectant mom posted on Instagram a photo of her husband kissing her huge baby bump. It was accompanied with another snap that saw her and her father kissing her mother’s stomach when the latter was pregnant with her brother Robert. In the accompanying message, she wrote, “Recreating a very special moment. Third trimester love.”

Bindi’s post was met with positive comments from many of her famous followers. One in particular was “Spy Kids” actress Alexa Vega who gushed, “so beautiful!” Teen actress Emmy Perry chimed in, “Oh this is everything!!!!!” Meanwhile, The Veronicas singer Jess Origliasso gave several red heart emojis in the comment section.

Bindi, who wed Chandler in March of the same year, confirmed her pregnancy in mid-August 2020 via Instagram. Posting a picture of herself and her husband holding a toddler-sized uniform from Australia Zoo, she declared, “Baby Wildlife Warrior due 2021. Chandler and I are proud to announce that we’re expecting! It’s an honour to share this special moment in our lives with you.”

“Though I’m still in my first trimester, we really want you to be part of our journey from the beginning of this new life chapter,” she added. “We couldn’t wait to share the news as this beautiful little being has become the most important part of our lives. Your support means the world to us. Please let me know your best advice and send good vibes & prayers to our little sweetheart. Love & light.”

In December, the young conservationist offered a pregnancy update by comparing her unborn baby’s size to a “shingleback lizard.” She noted on Instagram at that time, “Thank you for your lovely comments and support on this remarkable journey. Now that I’m 26 weeks pregnant, our daughter is about the same size as a shingleback lizard. Swipe across to meet Pinecone the shingleback lizard who I think is really excited about that.”