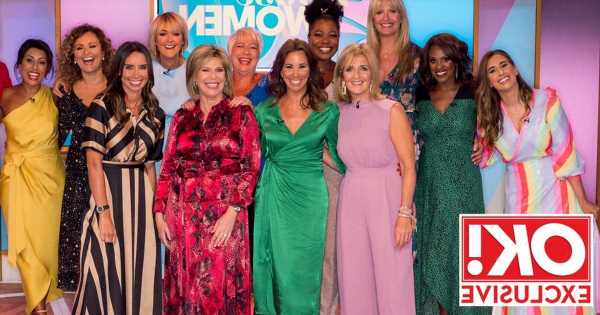 Stacey Solomon has only just jetted off on her hen do – but her Loose Women co-star Denise Welch has revealed that a second bash is also in the diary.

After Joe’s jam-packed stag do just weeks ago, Stacey jetted off for her hen do on Wednesday morning.

And while Stacey was sporting a pickle costume at the airport – yes, really – Denise, 64, spilled the beans on her pal’s other plans during an interview with OK!.

Speaking at the TRIC Awards – which OK! is the media partner for – Denise explained that she’s been saving the date for a special Loose Women get-together that’s happening before Stacey’s big day.

She told us: “We’ve been invited to a hen party [this month]. I thought that I wasn’t going to be around but I might be now. I haven’t been able to see her in absolutely ages.”

Denise added that the bash will be “a little get together” – but it’s no secret that the Loose Women love to let their hair down when they get to spend time together.

Speaking to OK! back in March, Jane Moore spilled the beans on the ladies’ “messy” nights out, telling us: “A lot of the time, it’s organic. Someone might say, ‘What are you doing now? Let’s go out,’ and then it becomes a really messy evening.

“Or we might be really sensible and just go for a quick drink. But we’ve had some really fun nights out.”

Stacey and Joe are set to marry at the Essex home they purchased last year.

Stacey has been busy preparing for her wedding in recent weeks, sharing plenty of her homemade decorations and Pickle Cottage alterations on Instagram.

The X Factor star recently revealed her wedding door and told fans she’s replanted an entire section of her garden so there will be white flowers on the day.

She also left Joe with a list of jobs to do while she’s away this week, admitting on Instagram that he wasn’t impressed needing to do so many chores.

Stacey’s hen do got off to a hilarious start on Wednesday morning, as the bride was dressed up as a pickle for the flight to the mystery venue.

“I can’t tell you how many beautiful brides we massed on our way through, off on their hen dos in diamante tiara and white dresses,” she wrote on Instagram.

“And I was being patted down in security in a big green pickle outfit,” she added alongside a string of laughing face emojis.