Sophie Turner took to her Instagram Story to debut new arm tattoos that paid homage to her little family!

Sophie Turner, 24, got fresh ink in honor of her husband Joe Jonas, 31, and their nearly four-month-old infant Willa! The initials “J” (for Joe) and “W” (for Willa) made their debut on the underside of Sophie’s wrist in a photo on her Instagram Story on Nov. 19. In the selfie, Sophie was also rocking a shirt with a good PSA: “Get your emotions in motion.”

Just three days prior, Sophie also paid homage to her baby girl after sharing a selfie of herself wearing a gold necklace with an inscription of Willa’s birth date: “22.07.20” Meanwhile, Joe recently gotten tatted himself; fans were convinced that the woman looking through the keyhole on the Jonas Brothers member’s neck, which he revealed in October, was actually a drawing of Sophie! Sophie and Joe seem to prefer little gestures like this here and there online, instead of making over-the-top posts or announcements about their personal life.

Sophie and Joe are occasionally spotted on strolls with Willa, like when the family of three stepped out for a neighborhood stroll on Nov. 13. Sophie opted to dress up for the family walk, wearing a black and white pinstripe blazer (you can see the outfit below). The trio was also spotted getting their cardio in with baby Willa in tow on Oct. 25 — you can check out multiple times the family of three have been spotted on their strolls, here! 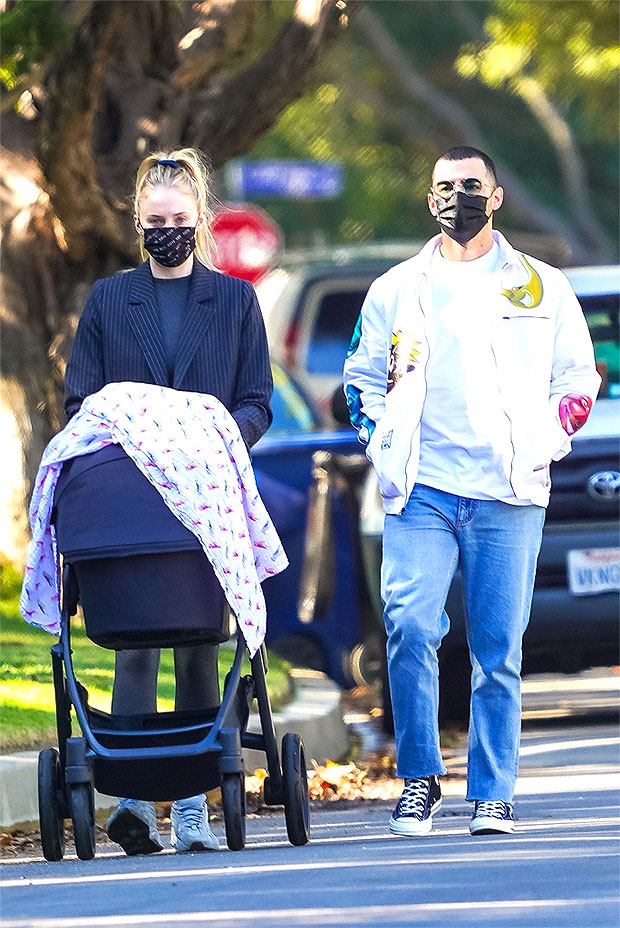 Baby Willa didn’t make her debut in public until the beginning of October, when she went for a ride in a pram with her parents. Even the pregnancy was relatively hush-hush, as Sophie allowed the paparazzi to snap photos of her baby bump instead of sharing photos of it herself in a big Instagram announcement.

While Sophie and Joe value their pregnancy, they do like to celebrate milestones online from time to time — like Sophie’s new tattoos and, in October, the three-year anniversary of when the Game of Thrones actress “said yes” to Joe’s marriage proposal in 2017. They made it official with a surprise wedding in Las Vegas officiated by an Elvis Presley impersonator in May of 2019, followed by a more posh ceremony in the South of France the very next month.