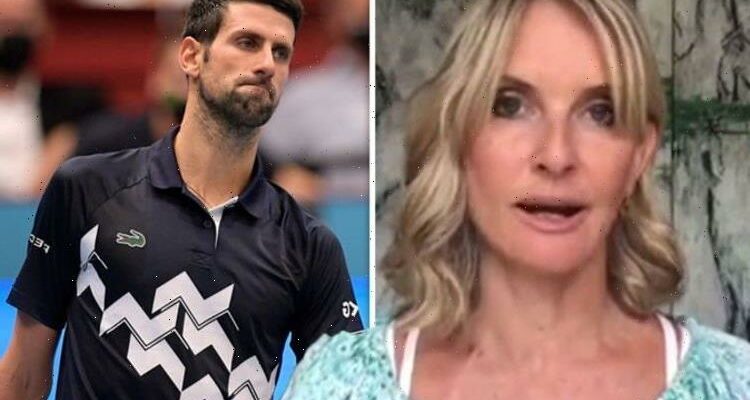 Sky News presenter Jacquie Beltrao has been left appalled by the personal “insults” thrown at Novak Djokovic. The on-screen broadcaster has come to the defence of the tennis champion over his visa issue into Australia after the athlete has been embroiled in controversy.

The tennis player is due to compete at the Australian Open but was not allowed through Melbourne Airport.

The 34-year-old was denied entry at the Australian border because his visa was rejected and his appeal will be heard on Monday.

Djokovic, whose Covid-19 vaccination status is unconfirmed, revealed an “exemption” from Tennis Australia to play the competition without being double-jabbed.

Jacquie, 56, has hit out at critics online where she claimed the sportsman has received insulting comments.

Taking to Twitter today, the Sky News’ host explained that the Wimbledon champion travelled Down Under in “good faith”.

In view of her 87,600 followers, she wrote: “Lot of haters on Twitter again – @DjokerNole was given a medical exemption (rightly or wrongly) to play in @AustralianOpen, he travelled in good faith but was turned away at the border & will now appeal.

“Yes he should have been vaccinated but all the personal insults – really?”

Jane wrote: “Agree personal insults are unacceptable but he is being treated like anyone without an acceptable visa. It doesn’t matter who he is.”

Kate Hull tweeted: “Personal insults are a no, no but he is no different from anyone else.”

@thebuntinglady added: “I am not understanding why it got this far? Surely with all his medical info to get his visa etc, they would have said it’s a red light sorry! We have absolutely NO right to be grilling the guy about his medical records and his choice of vaccination though.”

In an earlier post, Jacquie explained that she did not agree with Djokovic’s “vaccination stance” but added that she didn’t believe he should be held in an “asylum” hotel.

The tennis star is currently being held in a quarantine hotel while he awaits a decision on his appeal.

She penned: “While I don’t agree with @DjokerNole‘s vaccination stance (his choice of course) I don’t know why Australia is detaining him in an asylum hotel. Treating him like everyone else? Well, he’s not like everyone else is he? He’s the World Number One player & @AustralianOpen Champion.”

Her tweet sparked a wave of opinions from social media users.

Jenn remarked: “His position/status/influence shouldn’t matter. He and his team knew what was expected for admission into the country. It’s a nominated quarantine hotel. He’s no different from anyone else.”

It read: “Look I definitely believe in taking action, I got vaccinated because of others and for my mum’s health, but how we are handling Novak’s situation is bad, really bad. Like these memes, headlines, this is one of our great champions but at the end of the day, he is human. Do better.”