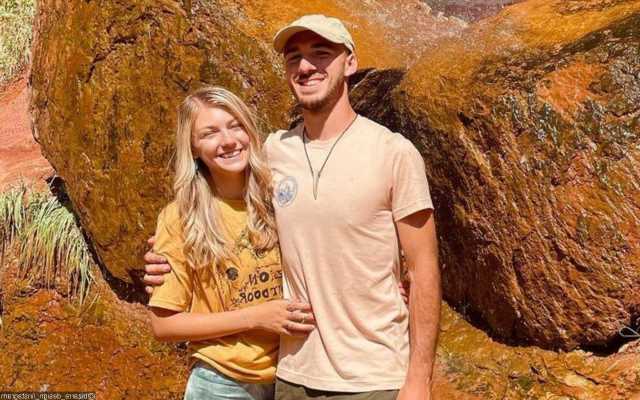 Meanwhile, a lawyer for Gabby’s parents and her stepparents read a letter addressed to Brian Laundrie’s parents on Thursday, September 16, begging them to share information to help solve the case.

AceShowbiz -Sister of Brian Laundrie, the fiance of YouTuber Gabrielle Petito and a person of interest in the case, has spoken up about Gabrielle’s disappearance. During her appearance on ABC’s “Good Morning America” on Friday, September 17, Cassie Laundrie revealed that she has “cooperated every way that I can” to help solve the case.

Of Brian, returned from his and Gabby’s cross-country van road trip to his home North Port on September 1, Cassie said, “I haven’t been able to talk to him. I wish I could talk to him.” Police in North Port said in a statement that Brian “has not made himself available to be interviewed by investigators or has provided any helpful details.”

“I’ve cooperated every way that I can. I wish I had information or I would give more,” Cassie added. “Me and my family want Gabby to be found safe. She’s like a sister and my children love her and all I want is for her to come home safe and sound and this to be just a big misunderstanding.”

On Thursday, Richard Stafford, a lawyer for Gabby’s parents and her stepparents, read at a press conference a letter addressed to Brian’s parents. “We understand you are going through a difficult time and your instinct to protect your son is strong,” Gabby’s parents and stepparents wrote in the letter, according to NBC News.

“We ask you to put yourselves in our shoes. We haven’t been able to sleep or eat and our lives are falling apart. We believe you know the location where Brian left Gabby. We beg you to tell us,” the letter continued. “As a parent how could you let us go through this pain and not help us. As a parent how could you put Gabby’s younger brothers and sisters through this.”

It went on to read, “Gabby lived with you for over a year. She was going to be your daughter in law. How can you keep your location hidden? You were both at Jim and Nichole’s house. You were both so happy that Brian and Gabby got engaged and were planning to spend their lives together. Please, if you or your family has any decency left, please tell us where Gabby is located. Tell us if we are even looking in the right place. All we want is Gabby to come home. Please help us make that happen.”

Gabrielle was reported missing by her parents on September 11 after they failed to contact her for weeks. According New York’s Suffolk County Police Department, they didn’t speak to her since the last week of August as she was supposedly traveling through the Grand Teton National Park in Wyoming.

It was also reported that authorities in Utah are currently looking into a possible link between Gabrielle’s disappearance to the gruesome murders of newlywed couple Crystal Turner and Kylen Schulte. Crystal and Kylen were found dead from multiple gunshots in a hiking trail near camping grounds in the La Sal Mountains.

Prior to their deaths, someone called the police after Gabrielle and Brian fought outside a food cooperative called Moonflower, which was also where Schulte had worked. Petito and Laundrie didn’t file any charges despite Petito slapping him during the fight.