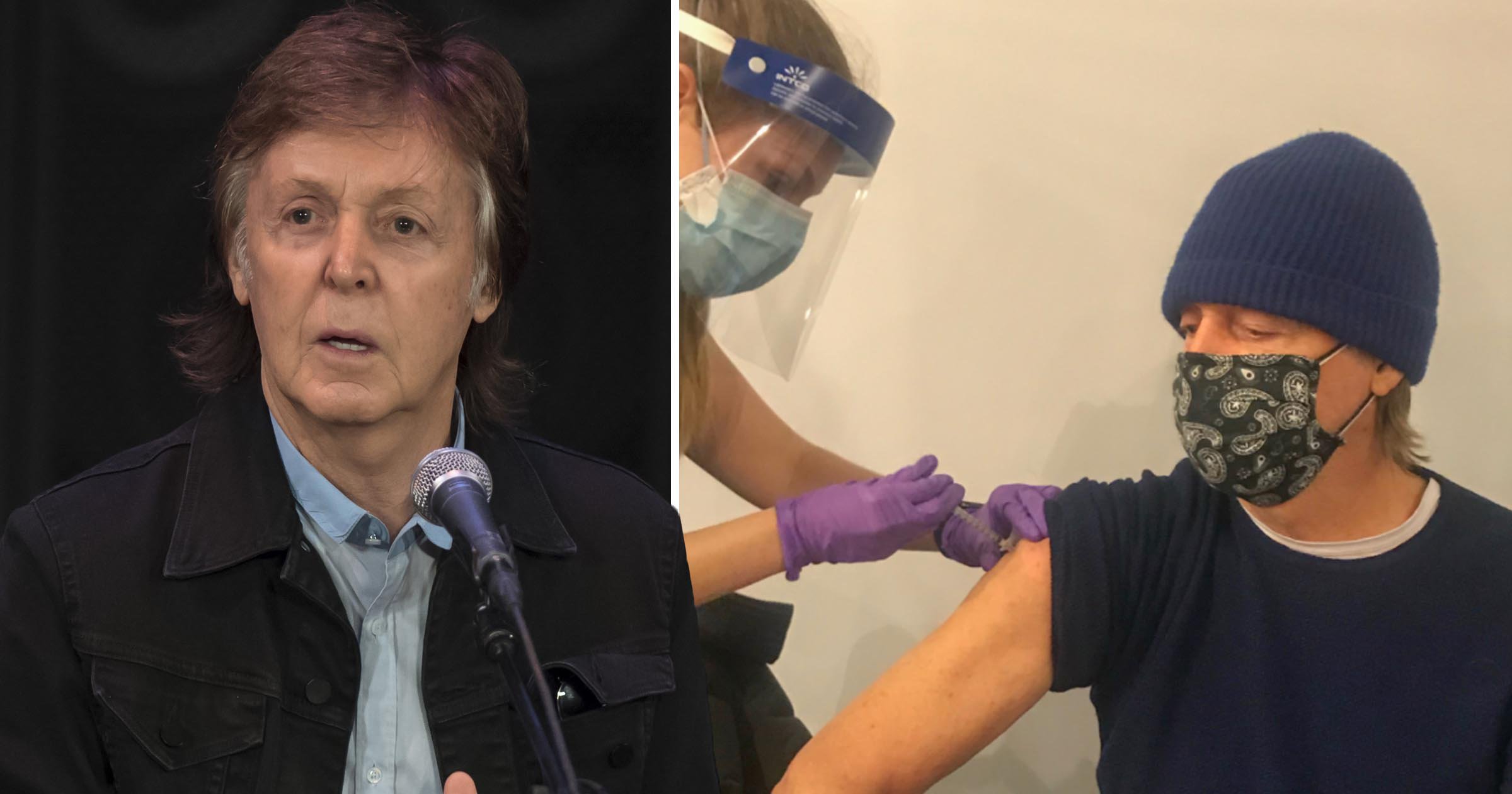 Beatles legend Sir Paul McCartney has had his Covid vaccination, labelling it ‘cool’ and is telling all his fans to get the injection too.

Posting a shot of himself getting the, er, shot, on Instagram, the singer was seen proffering his arm to his frontline medical worker as she gave him his jab.

The 79-year-old was going incognito in a navy beanie hat and matching T-shirt, with a black and white paisley print face mask.

Next to his uploaded photo, Sir Paul simply wrote: ‘BE COOL. GET VAX’D – Paul.’

Followers flocked to the comment section to applaud his message, with one posting ‘GO PAUL GO’ while another put: ‘you [sic] dropped this 👑’, with a crown emoji.

Others were having fun with his past lyrics, as one fan joked: ‘The minute you let her under your skin [sic] Then you begin to make it better ❤️❤️❤️❤️❤️🙌🙌🙌🙌🙌👏👏👏’, a reference to The Beatles enduring 1968 hit, Hey Jude.

‘Hey Paul, you should give Eric Clapton a call 😂’, wrote another user, in reference to the musician’s recent stand against Prime Minister Boris Johnson’s planned Covid vaccine passports, threatening to cancel his UK tour if the ‘discriminatory’ plans go ahead.

In a statement released via architect, film producer and anti-vaxxer Robin Monotti Graziadei’s Telegram account, Clapton said: ‘Following the PM’s announcement on Monday the 19th of July 2021, I feel honor bound to make an announcement of my own.

‘I wish to say that I will not perform on any stage where there is a discriminated audience present.’

He added: ‘Unless there is provision made for all people to attend, I reserve the right to cancel the show.’

Clapton, 76, has two scheduled shows at London’s Royal Albert Hall in May 2022.

The Wonderful Tonight singer has been vocal throughout the Covid pandemic, releasing anti-vaccination and anti-lockdown statements and songs.

In May, the musician detailed the ‘disastrous’ reaction he had to the vaccine and slammed what he branded ‘propaganda’ that ‘overstated’ the safety of the jab.

The Medical Healthcare Products and Regulatory Agency has previously reiterated that the benefits of the Oxford-AstraZeneca jab outweigh the risks for most people, while Mr Johnson and medical director of primary care at NHS England Dr Nikita Kanani also previously assured people the Oxford vaccine is safe.

Meanwhile, Lord of the Rings director Peter Jackson has given an update on his feature-length documentary The Beatles: Get Back, revealing that it’s been ‘the longest editing I’ve ever done in my career’.

The film follows Sir Paul and bandmates Ringo Starr, John Lennon and George Harrison during the fractious recording period for their Grammy-winning studio album Let It Be, which was released in 1970.

The Oscar-winning director dissected 55 hours of footage of the hugely famous band as they recorded the release, calling it ‘a very complicated thing to cut’.