Simone Biles has a lot of love for fellow gymnast MyKayla Skinner. The celebrated athlete shared a heartfelt message for Skinner after Skinner came up short in the qualifying rounds to compete at the Tokyo Olympic Games.

“So proud of this one,” Biles, 24, wrote on her Instagram story, alongside a photo of herself and Skinner sharing a hug. “No one understands the hard work and dedication it takes to come back from collegiate gymnastics and make an olympic team. You did the damn thing!”

Skinner, 24, was an alternate at the 2016 Olympics, and then competed in collegiate level gymnastics while attending the University of Utah. She stepped away from her schooling in her junior year, with the intent to continue, when the opportunity came to try for a spot at this year’s Olympics.

Skinner qualified to compete in the individual events at the Tokyo Games, instead of as a member of Team USA, but failed to qualify for any event final during Sunday’s rounds. Each country can only send to athletes to a final, and Skinner finished behind Biles and 21-year-old Jade Carey.

“Thanks for reminding us that grandmas can do it too!” added Biles jokingly. Biles and Skinner are the two oldest gymnasts representing the US at this year’s Olympics. “Thanks for keeping gym light hearted and fun! I love you Ms Olympian.” 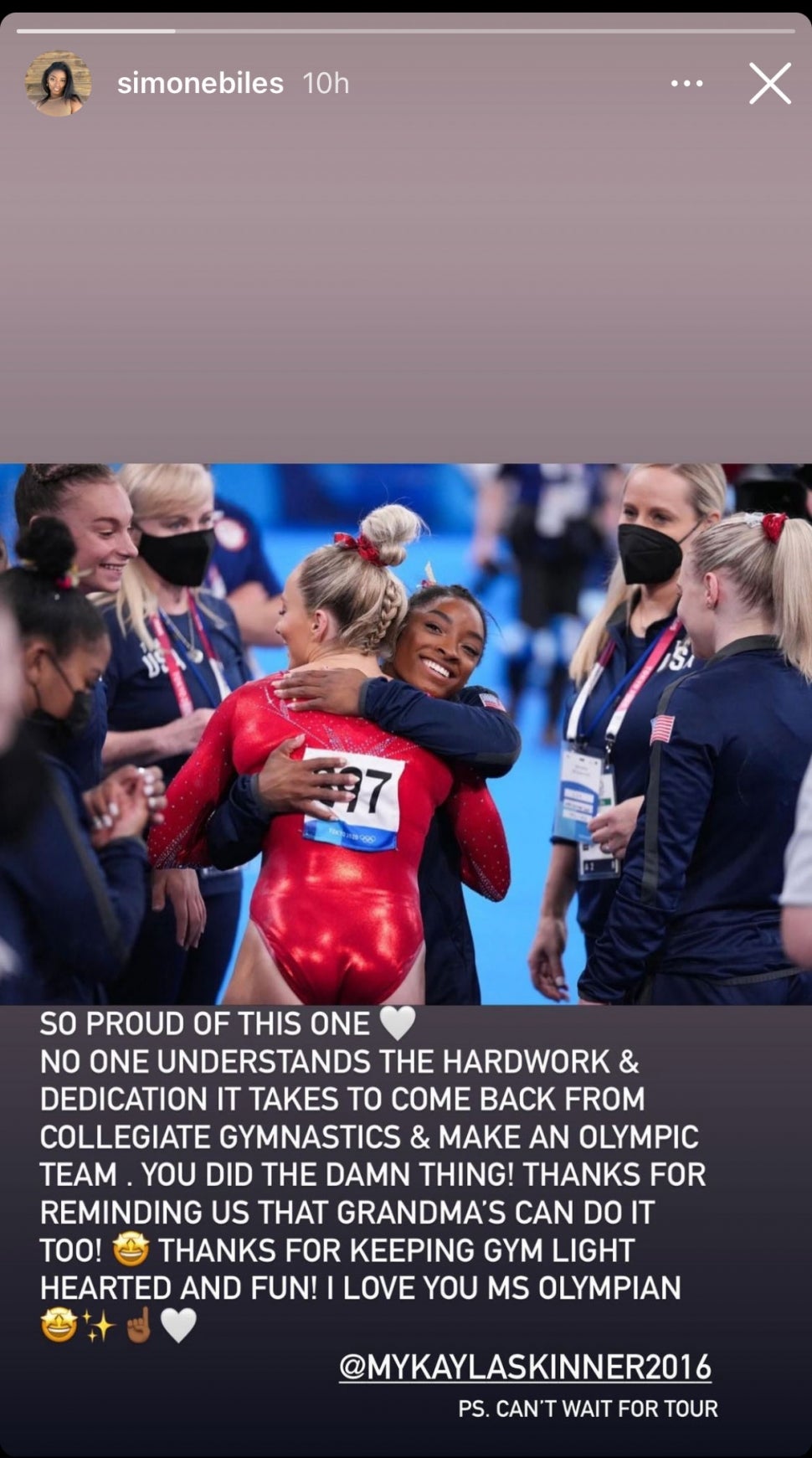 Biles also tweeted her appreciative sentiments, and Skinner replied, “Don’t know what I would do without youuuu!!! 😘 thanks sis.”

Don’t know what I would do without youuuu!!! 😘 thanks sis https://t.co/wTyhAltwRI

Skinner also addressed her departure from the games on Twitter, sharing, “Heart broken💔 but feeling sooo humbled and blessed for the amazing performance I had tonight!”

“You have all brought me to tears thanks for being my biggest cheerleaders!” she added. “Love u all😘 xoxo myk.”

Heart broken💔 but feeling sooo humbled and blessed for the amazing performance I had tonight! You have all brought me to tears thanks for being my biggest cheerleaders! Love u all😘 xoxo myk

Skinner has already stated that she plans on retiring from the sport and will finish her education without continuing to compete.

“The Olympics this summer will mark my last gymnastics competition before I officially retire,” Skinner said in a statement to her university, according to Us Weekly. “I have nothing but good things to say about Utah Gymnastics, from the organization, the athletes, the fans, to Coach Tom and the staff. I will return to finish my degree and graduate at the U, and will forever be a Red Rock.”

For more news from this year’s Tokyo Olympic Games, check out the video below.