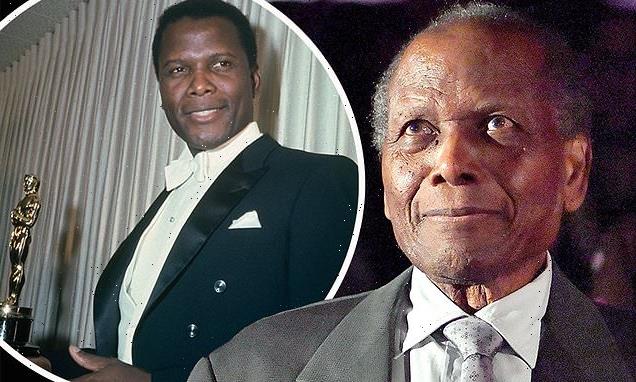 Poitier – who was the first black actor to win an Academy Award for Best Actor, in 1964 – passed away at his home in Beverly Hills, California, earlier this month.

TMZ reports that the legal document confirming his passing had also listed his occupation as an actor, with other 76 years in the business.

Poitier’s death was confirmed on Jan. 7 by Fred Mitchell, Minister of Foreign Affairs for the Bahamas, where Poitier grew up. 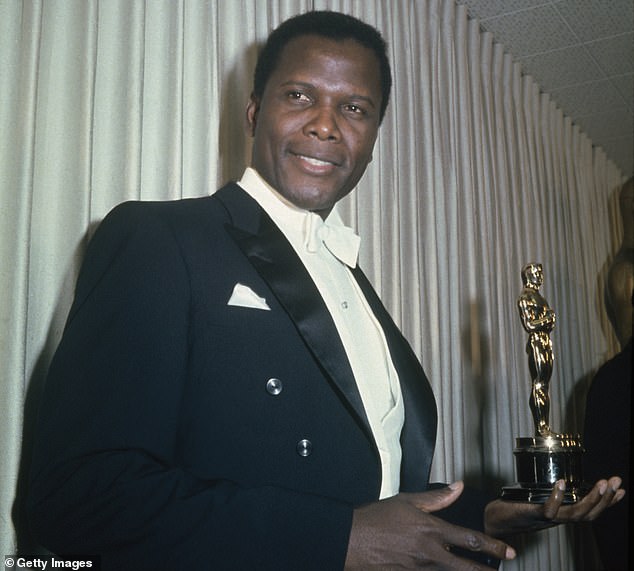 RIP: Oscar-winning Hollywood star Sir Sidney Poitier has died at 94. He made history as the first black man to win an Oscar for best actor (above) in 1964 for Lilies Of The Field

At the time, his cause of death was not revealed, but now it’s emerged that it was due to a combination of heart failure, his battle with Alzheimer’s dementia and prostate cancer.

Twice-married, he had four daughters with his first wife Juanita Hardy and two with his second wife Joanna Shimkus, as well as eight grandchildren and three great-grandchildren. 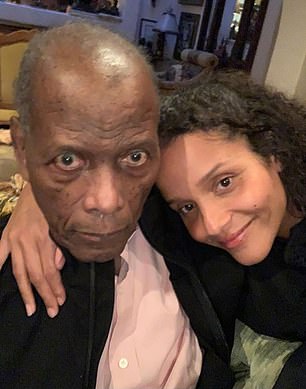 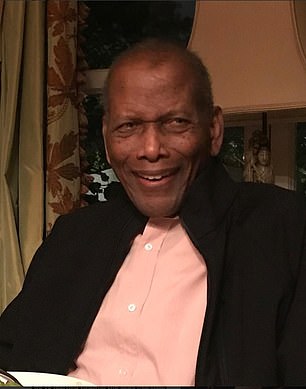 In the last known photo of him, Poitier is seen left in February 2021 celebrating his 94th birthday with his daughter. Right, he is at his 92nd birthday in 2019

Barack Obama paid tribute to the actor’s ‘singular talent’ in a heartfelt post.

‘Through his groundbreaking roles and singular talent, Sidney Poitier epitomized dignity and grace, revealing the power of movies to bring us closer together. He also opened doors for a generation of actors. Michelle and I send our love to his family and legion of fans,’ Obama wrote on Twitter.

He accompanied his tribute with a photograph of himself and Michelle with Poitier in the Oval Office after he received the Presidential Medal of Freedom in 2009.

Legions of famous faces from across the world shared memories and praise of the actor, including President Joe Biden who said in a statement that Poitier’s ‘work carried so much dignity, power, and grace that it changed the world on and off the big screen.’ 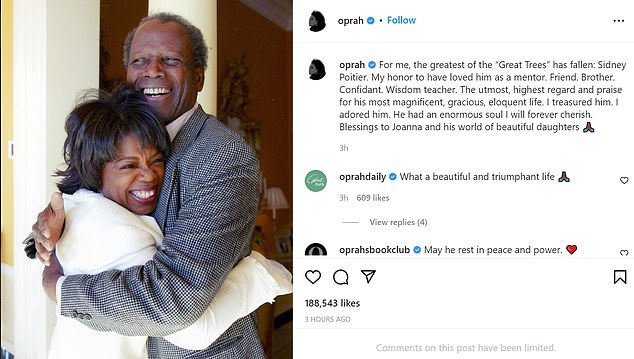 Oprah Winfrey posted a photo of herself hugging Poitier, writing: ‘the greatest of the ‘Great Trees’ has fallen’

Leading the Hollywood tributes earlier this month were Oprah Winfrey, Denzel Washington, Harry Belafonte, Whoopie Goldberg, and Tyler Perry, who wrote: ‘The grace and class that this man has shown throughout his entire life, the example he set for me, not only as a black man but as a human being will never be forgotten.’

During his first marriage, he began a nine-year affair with actress Diahann Carroll, whom he met when they worked together on the 1959 movie Porgy and Bess. The fallout from the affair ended the marriages of both Carroll and Poitier, whose subsequent second marriage to Shimkus was more enduring, lasting 45 years until his death. 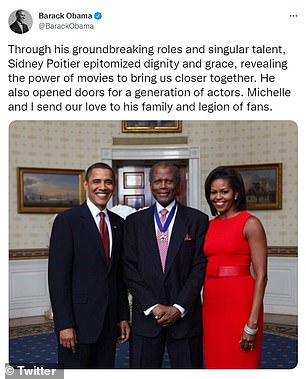 In 2016, Poitier was awarded a BAFTA fellowship, but did not attend the event due to ill health.

Poitier received the Kennedy Center Honor in 1995 and an received the Presidential Medal of Freedom from Barack Obama in 2009.

He was also awarded an Knight Commander of the Order of the British Empire by Queen Elizabeth II in 1974.

Upon news of his death, tributes flowed in from around the world, with musician Lenny Kravitz writing that Poitier ‘showed the world that with vision and grace, all is possible.’

Biden said in his statement that ‘Sidney was more than just one of the finest actors in our history.’

‘He blazed a path for our Nation to follow, and a legacy that touches every part of our society today,’ said Biden.

‘For over 80 years, Sidney and I laughed, cried and made as much mischief as we could,’ he wrote. ‘He was truly my brother and partner in trying to make this world a little better. He certainly made mine a whole lot better.’ 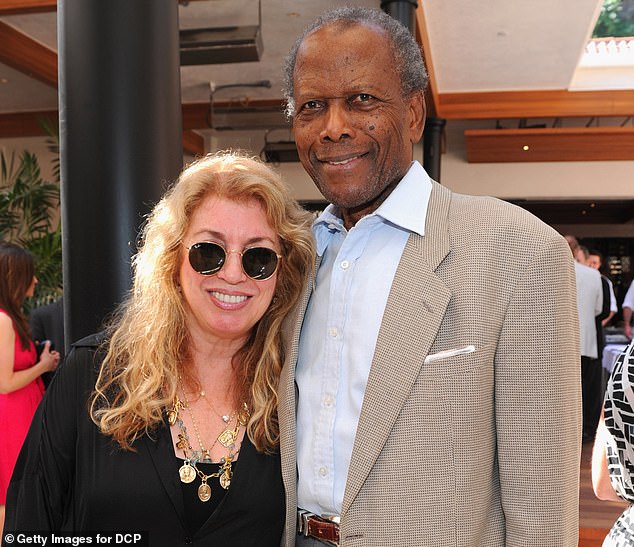 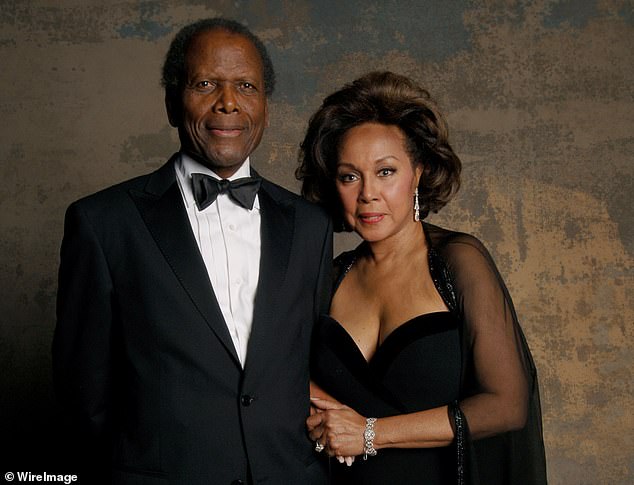 During his first marriage, Poitier began a nine-year affair with actress Diahann Carroll (with him in 2005) whom he met when they worked together on the 1959 movie Porgy and Bess

Denzel Washington told the Hollywood Reporter: ‘It was a privilege to call Sidney Poitier my friend. He was a gentle man and opened doors for all of us that had been closed for years. God bless him and his family.’

Oprah Winfrey posted a photo of herself hugging Poitier, writing: ‘the greatest of the ‘Great Trees’ has fallen.’

‘The utmost, highest regard and praise for his most magnificent, gracious, eloquent life. I treasured him. I adored him. He had an enormous soul I will forever cherish,’ added Winfrey.

Actor Billy Dee Williams wrote on Twitter: ‘You were an incredibly beautiful, kind soul who changed the lives of so many, and a hero to all. The world was a much better place because you were in it, and we will miss you.’

‘Sidney Poitier, your last sunset with us is the dawn of many generations rising in the path of light you blazed. We will always hold you in our hearts and forever speak your name,’ wrote actor and director Debbie Allen on Twitter.

‘One of the greatest actors of his generation,’ musician Questlove posted on Instagram. ‘We all have our Poitier era. Growing up in the 70s I’d have to say that maybe Uptown Saturday Night was the first movie I ever watched. … Rest in peace. And thank you.’ 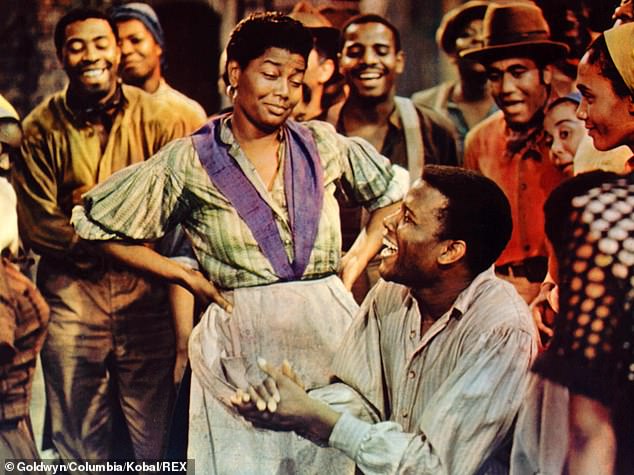 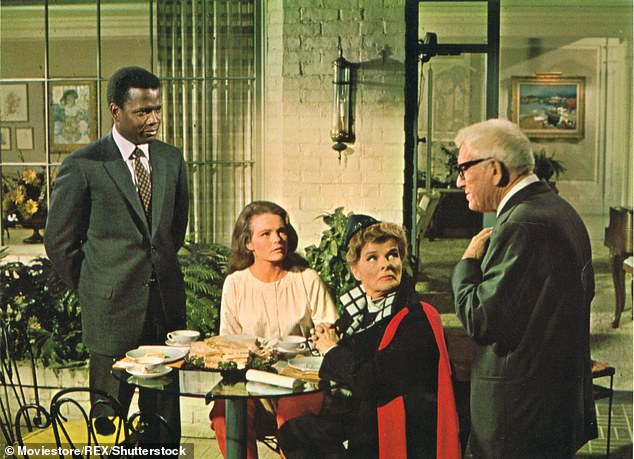 Poitier was knighted by Britain’s Queen Elizabeth II in 1974 and served as the Bahamian ambassador to Japan and to UNESCO, the U.N. cultural agency. He also sat on Walt Disney’s board of directors from 1994 to 2003.

In 2009, Poitier was awarded the highest U.S. civilian honor, the Presidential Medal of Freedom, by President Barack Obama.

The 2014 Academy Awards ceremony marked the 50th anniversary of Poitier’s historic Oscar and he was there to present the award for best director.