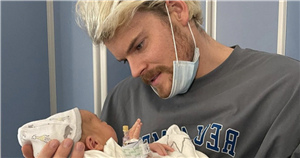 Ryan Libbey has shared his reflections for the first time on what has been a difficult few months for the new dad, after fiancée Louise Thompson was close to death giving birth to their son Leo-Hunter.

In the first of a selection of photos posted on Tuesday, Ryan was pictured in hospital cradling his baby boy shortly after being born, still connected to tubes whilst being wrapped in a white blanket.

The following snaps continued to show the personal trainer holding and kissing Leo sweetly at home and later in a restaurant, as the newborn was captured wearing a striped Babygro and grey beanie matching his dad’s. “The last few months of my life have tested me in more ways than I could have ever imagined,” Ryan captioned the pictures.

“This kinda stuff you don’t prepare for. Sometimes it just lands at your door and you’ve got to deal with it.

“I’ve got so much that I intend on sharing with you, maybe some of what I have to say will help someone going through a particularly bad time.

“I’ve learnt a lot, about myself, about life, about what really matters.” The 31-year-old continued to discuss what he has most importantly realised having gone through such an unsettling time with partner Louise concerning her health as the pair have also had to adjust to becoming new parents.

“I guess first and foremost on that the long list of hard lessons – hold on tight to the people you love. It can all change in a blink of an eye,” Ryan added.

“Thank you to everyone who has contacted us, sent cards, stopped us in the street – all of your support and good wishes are gratefully received.

“You’ll be seeing a lot more from the 3 of us as we rebuild and come back stronger.”

Louise also shared a photo of her son Leo on Tuesday, marking him turning two months with a close-up shot of her baby dressed in a light blue collared Babygro.

“My love bug #2months,” she captioned.

This follows the Made in Chelsea star's recent tribute post to fiancé Ryan in which she thanked him for helping her in her recovery after suffering “serious complications” after labour. Louise recalled on Instagram how Ryan had “called ambulances” for her, given her injections, showered her and “changed sanitary towels” for, all whilst having to raise their son for his first month as a single parent.

She has since opened up about having PTSD from her traumatic health experience and also “frustrating” depressive panic episodes that have left her with "dizziness” and “temperatures.”