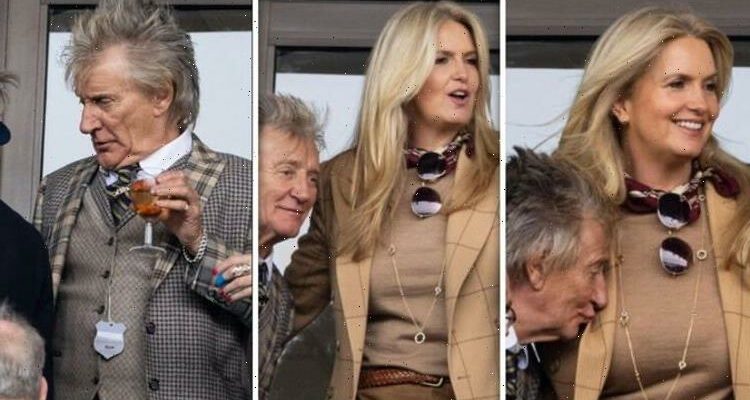 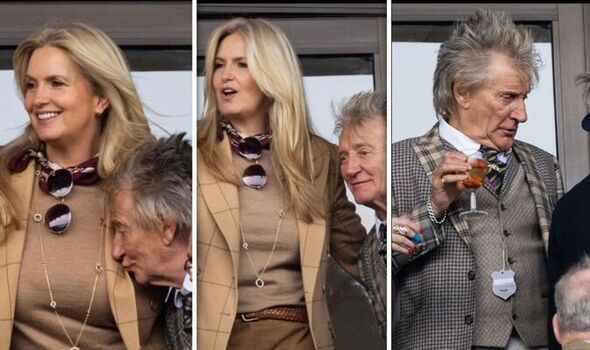 Rod appeared to plant a kiss on Penny’s chest as she stood with her arm around her rocker husband.

Rod Stewart was pictured appearing to plant a smooch on wife Penny Lancaster’s breasts at the Cheltenham Festival earlier today.

As celebrities descended on day one of the horse-racing festival, Rod and Penny got stuck into the fun straight away.

Both clutching drinks, the famous couple looked to be having a jolly time as they watched the action from their seats.

Rod, 77, and Penny, 51, wore coordinating outfits as they both opted for neutral brown tones and checked patterns.

The We Are Sailing singer looked dapper in a tweed waistcoat and slacks, with a green and yellow striped tie and some silver bling.

Penny pulled off a chic ensemble with a brown jumper, a matching checked blazer and a stylish scarf tied around her neck.

The pair looked animated as they remarked on the races below, chatting to friends and posing for photos.

Despite his second ankle operation almost a year ago as well as a recent knee replacement, Rod proved he was still very mobile as he hoisted his leg up onto the stands in front of him.

Rod and Penny look animated as they watched the horse-racing

Rod puckered up as he posed for a photo with Penny

The We Are Sailing crooner looked like he was having fun as he posed with Penny and his pals.

The star was watching day one of the horse-racing festival.

Rod and Penny co-ordinated their outfits

They both matched in brown tones with checked patterns.

Rod proved he was still mobile after several operations

The 77-year-old has undergone surgery on his knee and ankle in recent years.

Rod and Penny have been married since 2007

They tied the knot eight years after they first became an item.