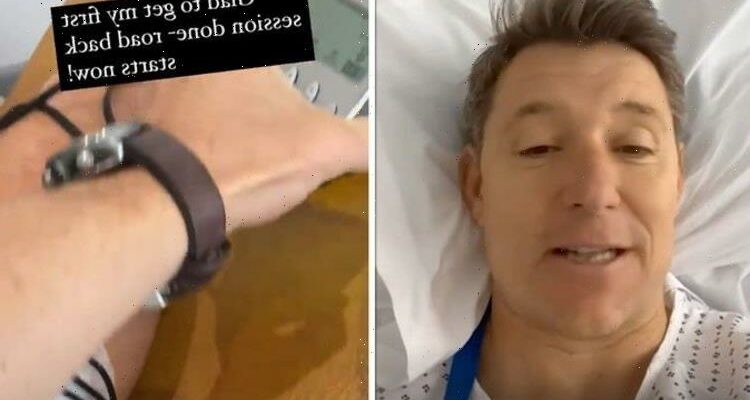 Good Morning Britain presenter Ben Shephard has updated fans on his rehab as he begins physio sessions. The star suffered a brutal football injury which left him needing surgery earlier this week.

However, it seems Ben is now on the road to recovery, as he revealed to his 475,000 followers.

The star shared a snap from his hospital bed as he began physio.

Taking to his Instagram stories, the broadcaster showed his injured knee being stimulated with electric pads.

Alongside the video, he penned: “First physio session working on extension through the knee and @complex_uk to stimulate my quads.

“Glad to get my first session done – road back starts now!”

The GMB presenter first revealed he’d been brought into hospital earlier this week.

Doctors had to operate after he tore his meniscus, ruptured his ACL and fractured his leg during a football match.

Following his surgery, Ben also explained how he had a “long, slow” road ahead of him.

The Tipping Point host revealed: “Hi there everybody, thank you for all the amazing love and messages.

“For those who didn’t know I ruptured my ACL and tore my meniscus in my knee playing football.”

Ben then continued: “So they’ve repaired the ACL and the meniscus and now starts the rehab, the very slow, long rehab.

“However, I have to say, the painkillers seem to be doing the job right now.”

Following his surgery, the presenter has been inundated with support.

His GMB co-stars also gave an update on the show about how he was doing.

She said: “Ben Shephard is in hospital recovering from surgery because he ruptured his ACL playing football.

“He’s going to have to undergo rehab to recover, but he did say the painkillers are doing the job.

“Oh, you are always a consummate broadcaster Ben Shephard, and good luck with your recovery.

“I know Ben is going to be back in the studio very soon.

“He watches us still from the hospital bed and I am sure he will be watching the game from there this evening.

“Lots of love to you Ben, get well soon.”