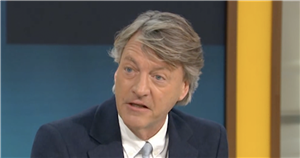 Richard Madeley bashed Chris Rock on Good Morning Britain on Monday as he spoke with co-host Susanna Reid about Will Smith slapping him on the Oscars stage.

The 65 year old described the controversial comedian as the “most unpleasant human being [he] had ever interviewed” as he reflected back on his last encounter with the US star back when he was hosting his Channel 4 show with wife Judy Finnigan.

“I was asked by GQ magazine some years ago who was the most unpleasant person I'd ever interviewed in my entire career and that goes back to 1972 when I was in local newspapers. I said without hesitation, Chris Rock,” Richard said.

“Judy and I interviewed him for our Channel 4 programme with Ben Stiller. They did voices in the film Madagascar. It was a pre-recorded interview but had it been live we would have abandoned it.

“He was the most unpleasant, rude, unlikeable human being I've ever interviewed on camera, without question.”

Earlier on in the daytime programme, the presenter appeared to be more defensive of Will when he discussed the incident that occurred at the Oscars on Sunday night where he hit Chris after he made a joke about his wife Jada Pinkett Smith’s alopecia.

While Richard voiced that Will’s actions were “clearly not OK”, he wondered about the motives behind the Oscar winner’s onstage meltdown.

"What I'm trying to suggest is, you could say it's wrong and he could be charged, was it something you would say that was understandable under the heat of the moment?"

The co-host empathised with the King Richard star, who was visibly emotional after the incident occurred when he received his Best Actor Oscar win at the end of the night, as he acknowledged comedian Chris’ attitude back when they met years ago.

“We edited around all the difficult bits and the interview that went out looked alright but his behaviour was awful,” Richard continued.

“In my book, he's the most unpleasant celebrity I've ever had the misfortune to meet. But I wouldn't have punched him.”

Will’s character on the other hand, was praised by the GMB presenters in general, leaving them more confused at the reasoning behind his onstage outburst.

“I understand that he did it. I don't think it's OK that he did it. I love Will Smith. He's a lovely guy. Whenever I've interviewed him, he's been charming and lovely,” Susanna added during their conversation.