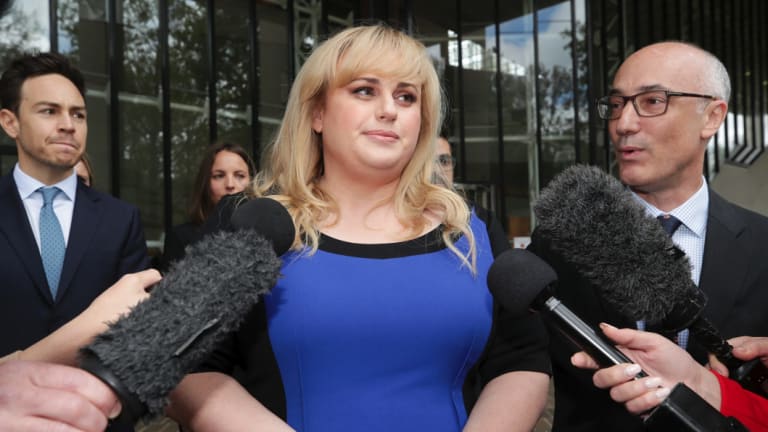 Actor Rebel Wilson departs after the High Court of Australia knocked back a bid for her appeal on her defamation case with Bauer Media to be heard, in Canberra on Friday 16 November 2018. Credit:Alex Ellinghausen / Fairfax Media

"Here [sic] an idea," Wilson tweeted. "How about you just DO YOUR JOB PROPERLY as journalists and publish factual articles. You can't be successfully sued in a defamation case if what you write is the truth. The Australian media blames the laws or cries 'free speech' (as in: they want to be free to write complete rubbish!) … Now it seems all their buddies are being targeted. Karma much?"

The 38-year-old's claim that journalists can't be successfully sued for writing the truth has been rubbished by lawyers. Michael Bradley, managing partner at Sydney-based law firm Marque Lawyers, said publishing the truth gives no guarantee against a successful lawsuit.

"Ultimately a jury or judge will decide, on the balance of probabilities, where they think the truth lies," he said. "That's an outcome, not a vindication. Remember, Eddie Obeid won his defamation case against Fairfax for labelling him as corrupt. Which he was."

Last month, Wilson's bid to continue fighting her defamation case against Bauer Media was overturned by the High Court. The 38-year-old sought special leave to appeal a decision that means she has to repay almost 90 per cent of her record $4.7 million defamation payout.

Earlier this year the Court of Appeal ruled that the publisher of Woman's Day magazine would now have to pay $600,000 in damages plus Wilson's legal costs. In comparison, a Victorian worker who becomes a quadriplegic as a result of a workplace accident can only claim just over $555,000, according to legislation.

Wilson's stance on defamation laws is at odds with some Australian comedians as well as supporters of the #MeToo movement, who say current legislation is preventing more women from speaking out against sexual harassment and assault.

In November, two young comedians from SBS program The Feed rewrote their script after advice from in-house lawyers. One of the performers, Jenna Owen, later argued it was important the country's defamation laws were brought in-line with countries like the United States.

"While the justice system has to be able to run its course, it's also incredibly broken and our job in comedy is to try and remind people that the defamation laws in Australia protect those with power and not those without it," she said.

"Australia's defamation laws get in the way of the truth," she wrote earlier this year. "The lack of protection of journalists is affecting the most vulnerable, the victims of sexual assault and sexual harassment in Australia."

Media outlets, including the publisher of this masthead, are lobbying for changes to defamation law. It comes as Oscar-winning actor Geoffrey Rush sues the publisher of The Daily Telegraph over a series of allegations published last year.

The federal opposition, under Labor leader Bill Shorten, has pledged to revamp defamation laws should it win next year’s election.