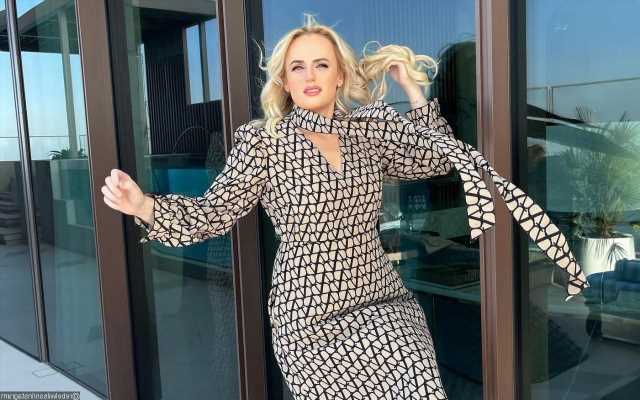 The ‘Pitch Perfect’ actress and her fiancee Ramona Arguma have been called out by social media critics after traveling to the Middle Eastern country for Beyonce’s star-studded concert.

AceShowbiz –Rebel Wilson has landed in hot water. The “Pitch Perfect” actress, who came out as a member of the LGBT community last year, has sparked outrage on social media over her trip to anti-LGBT country Dubai.

The Australian actress and her fiancee, Ramona Agruma, were slammed by social media critics over the weekend after traveling to the Middle Eastern country for Beyonce Knowles‘ star-studded concert at the luxurious Atlantis The Royal hotel.

“Atlantis The Royal is BEYond! What a weekend with BEY! @atlantistheroyal,” Rebel captioned a video shared via Instagram, which showed the two soaking up the hotel’s amenities, indulging in fancy meals and dancing at the singer’s show.

Critics quickly took to the comments section of Rebel’s post to slam the 42-year-old actress for traveling to a place where same-sex sexual activity is punishable by the death penalty. ‘”So … any update on the situation of LGBTQ there?” one person bluntly asked.

“Gee Rebel. You do know that it’s the death penalty in Dubai for homosexuality?? Supporting such a country is really really poor form, especially as a member of that community,” a second person argued. “Human rights? LGBTQ? Unfollowing now,” someone else commented, with a fourth adding, “Oh the Privilege. What about other LGBT people?”

A different person slammed Rebel for accepting “a nice free trip” to a place where “you can’t be gay.” Another labeled her “hypocrisy,” writing, “Aren’t You a member of LGBTQ+ community? The hypocrisy of it All.” Someone chimed in, “I’m so mad about this. Don’t [sic] Rebel knows that under UAE law same-sex sexual activity is punishable by the death penalty! Why are Rebel showing her LGBTQ fans this advertising?!?!”

Rebel came out as gay in June last year. At the time, she made the announcement with a sweet snapshot of her and her partner Ramona. Around seven months later, in November, it’s reported that they got engaged.

Also in November, Rebel welcomed a baby girl, named Royce Lillian, via surrogate. “Beyond proud to announce the birth of my first child, Royce Lillian, born this past week via surrogate,” the “Bridesmaids” star captioned an adorable snapshot of the baby. “I can’t even describe the love I have for her, she’s a beautiful miracle!”