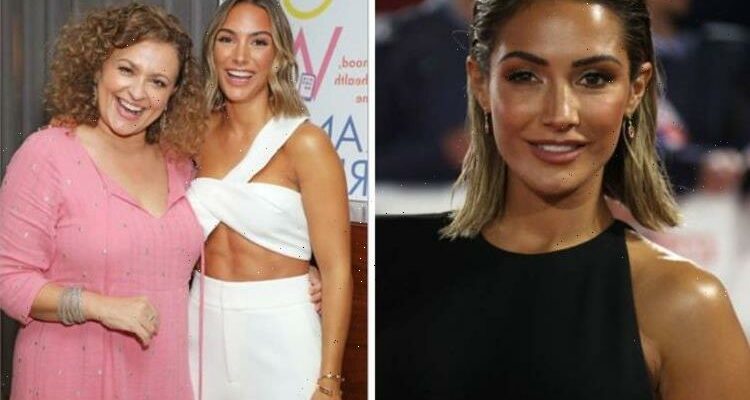 Frankie Bridge, 33, has spoken up about recent claims that there have been clashes within the Loose Women studio. The former The Saturdays singer has addressed the rumours in a new interview.

Reports suggested that certain presenters refused to appear alongside Coleen Nolan after whispers of feuds.

However, these have since been firmly denied by the stars involved, Coleen and ITV.

Frankie, who recently became of a full-time panellist as of 2021, appearing on the show since 2010, has said that she has never been a witness to any arguments herself.

She told Fabulous Magazine today that she was asked by her friends about the rumours.

The star said: “My friends asked me about [the rumoured rows].

“I genuinely don’t experience it or see it.

“When I first went on the show, I was nervous because I’ve read about all these feuds.

“I think it’s sad that this doesn’t happen on something like [Sky comedy show] A League Of Their Own with a group of men. It’s just not mentioned.”

The singer explained that she feels all the rumours undo “all the good” that Loose Women does.

She added that it was a “real shame” that people were always looking for women to fight.

“While we laugh and talk about silly subjects, we also talk about really important subjects.”

She confirmed that she never had any trouble with other panellists.

Frankie said that she “gets on with everyone” and that there isn’t a single person about whom she would say ‘don’t put me on with them.’”

“I get on really well with Coleen,” the star added.

Frankie, who is married to Wayne Bridge and with whom she shares two children, also recently told The Sun that she dislikes January, despite it being her birthday month.

She said: “I find January hard. Nothing really happens. I do like the newness of a new year, but even that’s hard with Covid to go: ‘New Year is going to be great.’ Because we said that last year…”

She explained that “it was the worst time to have a birthday” as everyone does dry January or no one has any money.

Frankie said that she hates she is getting into her 30s.

“It reminds me of when I was a kid, hearing people mention their 30s and thinking: ‘God, you’re old!’

“But then there are people like my friend Lisa Snowdon, who is 50 and doesn’t look it.

“When someone said they were 50 back in the day, they would seem so old, but she seems so young,” the star said.