Prince William and Duchess Kate are preparing to attend the Commonwealth Games next week in what promises to be the biggest sporting festival in the UK since the London Olympics a decade ago.

And while they’ll be soaking up the action first-hand, the royals are known for their sporting prowess as well as enjoying a bit of healthy competition themselves.

The royal couple often display their competitive streaks during public engagements, from their dragon boat race back in 2011 to running against each other at a London Marathon training session in 2017.

But there is one field in which Prince William can never get the upper hand – tennis. It’s no secret that Kate is a talented tennis player, having honed her skills on the court at the prestigious Hurlingham Club in London. Former number one Rod Laver can also vouch for the Duchess’ competitiveness especially when it comes to playing her husband.

Speaking to the Daily Mail‘s Sebastian Shakespeare, the Australian shared: “I’d met William and Kate a few times, and in the Royal Box you get a chance to chat with them a little bit. They play tennis against each other. William told me he couldn’t beat her.” 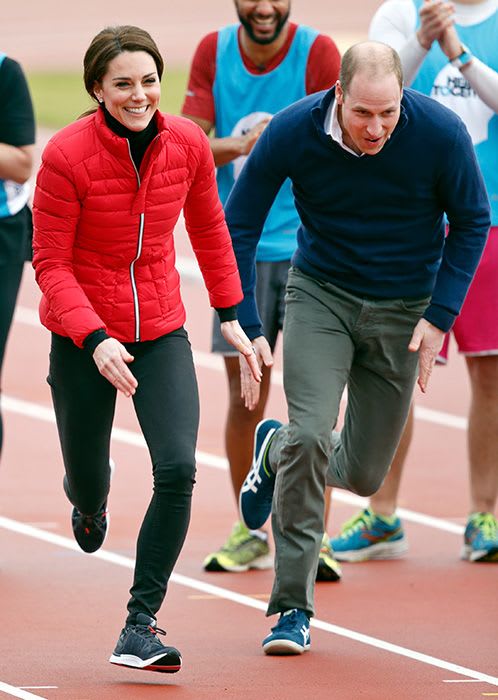 Kate and William both have a competitive streak

Prince William might also find he has met his match with little Prince George. The seven-year-old has had private lessons from Roger Federer at the Middleton family home in Bucklebury.

Roger is a long-time friend of the Middleton family and he and his wife Mirka even attended Pippa’s wedding to James Matthews in 2017.

During her 2019 visit to Wimbledon, Kate revealed George was a huge tennis fan and had been practising his swing with the sportstar. Asked about George’s progress, Roger told reporters the little Prince showed promise, adding: “At that stage it’s all about just touch the ball. It’s already good. Same with my boys.”

It was the Prince’s first time this year

Upon being informed that he was George’s favourite tennis player, Roger said with a smile: “I think I have a little advantage that I actually spent some time, you know, with him. So maybe I’m the only player he’s ever met, then you have a little head start in who is your favourite player.” He added: “Look, he’s a cute boy. I love to see that they’re into tennis or into sports. Definitely. You know, his mum has always enjoyed tennis. That’s it. I hope that he’ll still say the same in a few years’ time.”

This year, George attended his first ever trip to Wimbledon and looked happier than ever to be watching the pros during the men’s final on the last day of the tournament, as he sat happily beside his parents, William and Kate.