The Palace announced Philip’s death on Friday. The Duke of Edinburgh was 99 years old. On Harry and Meghan’s Archewell website, they posted a tribute to the late royal.

“IN LOVING MEMORY OF His Royal Highness,” the statement on their homepage reads in white amid a gray background. “The Duke of Edinburgh 1921-2021. THANK YOU FOR YOUR SERVICE…YOU WILL BE GREATLY MISSED.” 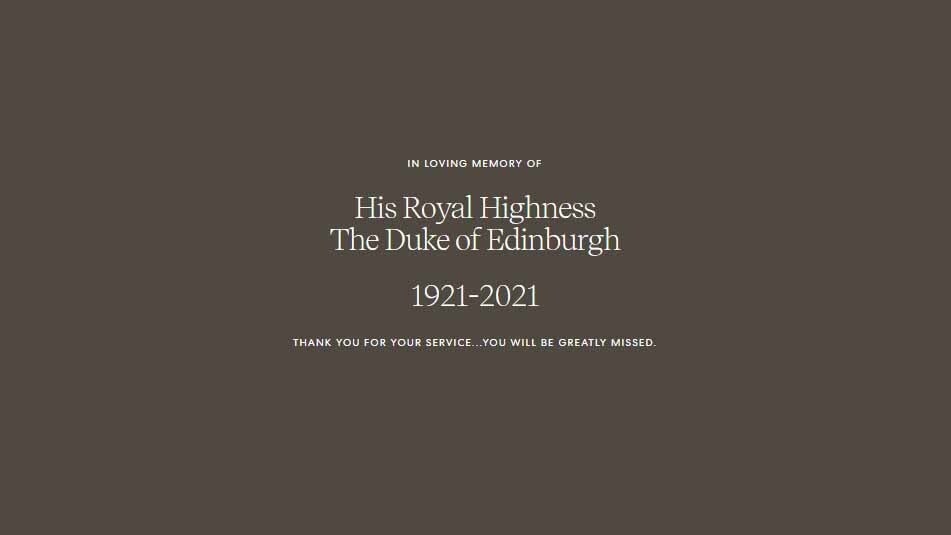 “It is with deep sorrow that Her Majesty The Queen has announced the death of her beloved husband, His Royal Highness The Prince Philip, Duke of Edinburgh,” the statement reads alongside a black-and-white portrait of Philip. “His Royal Highness passed away peacefully this morning at Windsor Castle. The Royal Family join with people around the world in mourning his loss. Further announcements will be made in due course.”

A post shared by Duke and Duchess of Cambridge (@kensingtonroyal)

In addition, the profile pics on the official Instagram and Twitter pages for the royal family — including the Royal Family, Kensington Palace and Clarence House accounts — were changed to black-and-white versions of their official crest and other royal symbols. The three accounts’ avatars were previously photos of the royals.

Queen Elizabeth will be taking a break from her royal duties to mourn the death of her husband. Following the news of Philip’s death on Friday, the queen is expected to enter an eight-day mourning period for her husband of 73 years, according to multiple reports. During the period, all royal duties, as well as affairs of state, will be paused. After the eight days, the country is expected to go into a 10 day-long mourning period, while the royal household will reportedly do so for 30 days.

As for when Philip will be laid to rest, The College of Arms — the body that assists in the organization of state ceremonies — said that he will not have a state funeral, and, as such, will not lie in state. Instead, the Duke of Edinburgh’s body will lie at rest in Windsor Castle ahead of the funeral in St George’s Chapel. The decision is both in line with custom and with Philip’s wishes, the College said.

Additionally, the College noted that funeral arrangements have been revised due to the ongoing COVID-19 pandemic, adding that “it is regretfully requested that members of the public do not attempt to attend or participate in any of the events that make up the funeral.”