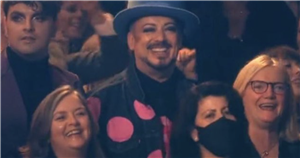 Phillip Schofield’s view of Adele was blocked by Boy George’s hat during the filming of her Audience With ITV special to the irritation of fans.

The presenter, 59, had been delegated a seat behind the Culture Club singer, 60, – who is known for wearing giant hats – and spent the evening leant to the side to catch a glimpse of Adele, 333, during her long-awaited show.

Philip received an exclusive invitation to the Easy on Me singer’s televised special held at the London Palladium along with Boy George and numerous other stars including Emma Thompson, Idris Elba, Mel B and Dawn French. No doubt excited to see the singer – who hasn’t performed in the UK for over four years – Phillip was left craning his neck behind the ‘80s pop band frontman to enjoy Adele’s performances.

Fans called Boy George “inconsiderate” for his choice of accessory after spotting him in the audience wearing an oversized blue bowler hat as he sat unfazed in front of the ITV presenter. “Yeah, I thought that was bit inconsiderate wearing that hat,” one viewer wrote on Twitter.

“That would reeaallyy p*ss me right off,” added another user.

It appeared though that Phillip, despite his compromised view, found it all pretty humorous as he retweeted a photo of himself leaning to the side in order to catch Adele, adding multiple cry laughing emojis. Culprit Boy George got involved on Twitter also after posting out an article he had found discussing his wardrobe choice to the show.

“Ha. What a load of utter sh**e. Been wearing hats since 1982 and been to a zillion f***ing shows! Grow up!” the singer captioned.

Phillip was seen at one point during the recording of the show sitting near Years & Years singer Olly Alexander and Good Morning Britain’s Kate Garraway, prompting viewers to guess that he had been moved.

Although many fans sympathised for the This Morning host, others were able to find the whole situation funny along with the presenter. “Screaming, I was wondering what poor soul was sat behind him and it was Phil,” one viewer commented.

“We caught the last ten minutes and only saw the hat from a distance. I said ‘I bet that’s Boy George in the hat!' Poor b****r whoever’s sat behind him!’” Another responded as a joke, while one other person added cheekily: “Does his head go all the way to the top of that hat?”

To get the latest showbiz and celebrity news straight to your inbox, sign up to OK!'s daily newsletter.