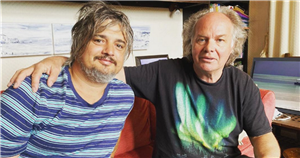 Pete Doherty has shared a smiley snap with fans after taking a step back and moving to Normandy with his girlfriend Latia de Vidas.

The Libertines frontman, who now enjoys strolls around the French countryside with his dog and his film editor girlfriend, posed for a sweet snap alongside author Thierry Lepoire on Monday as he introduced himself to the neighbourhood.

The former rocker, 42, smiled next to the famed writer, and sported a blue striped shirt, grey unkempt beard and long wavy locks.

He captioned the post: “A splendid neighbour and a splendid writer! @thierry_lepoire.”

Pete, who is now clean from drugs, admitted cheese on toast and sleep are his guilty pleasures nowadays.

Speaking to The Sun, the musician said: “I like Comté [a type of French cheese], Comté on toast. My guilty pleasure is sleeping.

“For years and years, I would stay up for five or six days and then I would sleep for 24 hours, so now I love sleep.

He added: “At the moment I’m quite clean. I stopped taking heroin and ketamine.

“I like experimenting, making cocktails with champagne, a bit of rum, orange juice, I’m coming across like a bit of an alcoholic, but I’m not – I like a nice glass of water."

The rock and roll star found fame in The Libertines in the early noughties and became a tabloid fixture when he began dating Kate Moss in 2005. These days, he can be found enjoying the French countryside with his belle, Latia.

Pete is a father to a teenage son, Astile, from a previous relationship with Lisa Moorish, and has a daughter Aisling, who he shares with model Lindi Hingston.

The 42-year-old has reportedly embraced every aspect of laid back French living – even taking up the popular bowls-style sport Pétanque.

One French local told publication: “Pete is no longer a bad boy. He’s relaxing, settling down and loving the good things in life.

“We introduced him to pétanque and he’s fallen in love with the game. He often joins our club nights when we play.”