The Kardashians’ finale aired last night (wow time flies when you’re watching an incredibly dramatic reality TV show), and tragically the season ended without an appearance from Kim Kardashian’s boyfriend Pete Davidson. Or! Did! It!

I mean, yes, technically it did—but Pete semi-showed up during a surprise post-credits scene, when he could be heard off-camera joking to Kim about her vagina. In the scene, Kim is seen calling Pete over to meet an old friend and audio producer named Paxy.

“Pete, come here you have to meet Paxy,” Kim said to Pete, who was off camera. “Paxy has worked with me as audio 14 years from Keeping Up With The Kardashians. She knows everything about me. She’s probably seen my vagina.” Pete then joked “More than me?” and Kim shot back “Not more than you. But she’s probably seen it.” 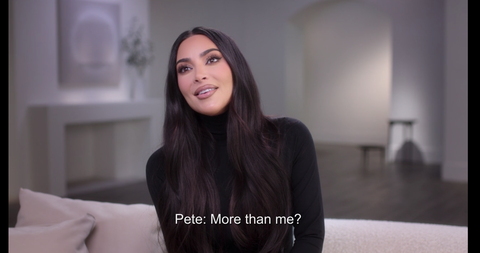 Truly praying for Paxy during this convo, who replied that she had not seen Kim’s vagina, prompting Kim to add “You haven’t seen my vagina? We’ll get there, takes time to warm up to seeing my vagina. But you could look on the internet.”

Anyway, TBD on when The Kardashians is returning for its second season, but it seems like there’s a chance Pete could make an appearance at some point based on him allowing his voice to be used? Either way, Kim began opening up about her relationship with Pete more and more as the show progressed in Season One, most recently noting that he’s the “best human being” she’s ever met, has “the best heart,” and “always wants the best for people.” But obviously, going reality TV official is a big step in any relationship (relatable!) so we’ll see what happens.