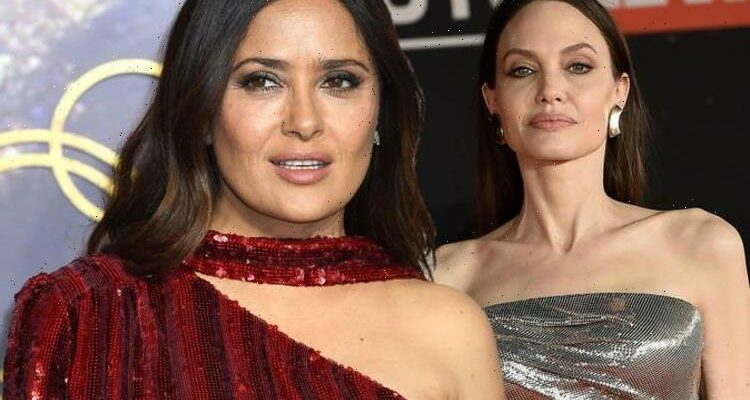 Film star Salma Hayek, 55, has hinted that fellow actress Angelina Jolie’s non-stop pursuit of social justice can sometimes be a bit much for her. Chatting to talk show host Graham Norton, 58, she explained how the two had “really hit it off” on the set of their new film Marvel’s Eternals.

Salma plays stoic and powerful leader Ajak, who has the ability to heal people.

Hollywood icon Angelina, 46, has taken on the role of elite warrior Thena, who can manifest weapons out of thin air.

Salma talked to Graham about working alongside her high-profile co-stars ahead of their new movie, which will be released in the UK on November 5.

“I spent a lot of time with these people, and they are such good friends now,” she said.

“Angie (Angelina Jolie) is amazing – we have so much in common and we really hit it off.

“She has kids the same age as mine and we love to fight for justice – her more than me.

“Sometimes we have really intense conversations and sometimes I just had to say, ‘Oh no, not today, Angie!’”

Talking about her debut Marvel role, Salma went on to explain how thrilled she was to be offered the chance to play a superhero.

“I could have been a mother of one of the mortals or the nanny, which is normally what I would have got,” she said.

“Actually, I was shocked when I was told I was going to be a superhero Latina woman in my 50s as I am.

“I was super excited but also scared because I had to sign a contract without seeing the script – I mean, I didn’t marry until I was in my 40s, so I was reluctant!

“But let’s face it, it is Marvel after all, so I signed!”

Salma is a Hollywood legend with an impressive acting resume, which includes 2002 film Friday where she portrayed artist Frida Kahlo.

The star dazzled her fans at the London Eternals premiere on Wednesday, where she wore a sparkling ruby red gown.

Angelina’s own career has seen her star in the likes of Girl, Interrupted, Changeling and Disney’s Maleficent.

Jesy Nelson performed her new song Boyz in the studio before joining Graham for a chat, where she confirmed her and Little Mix “weren’t talking anymore” but that she “still loved them to pieces”.

The Graham Norton Show airs on BBC One tonight at 10:35pm. Also available on BBC iPlayer.