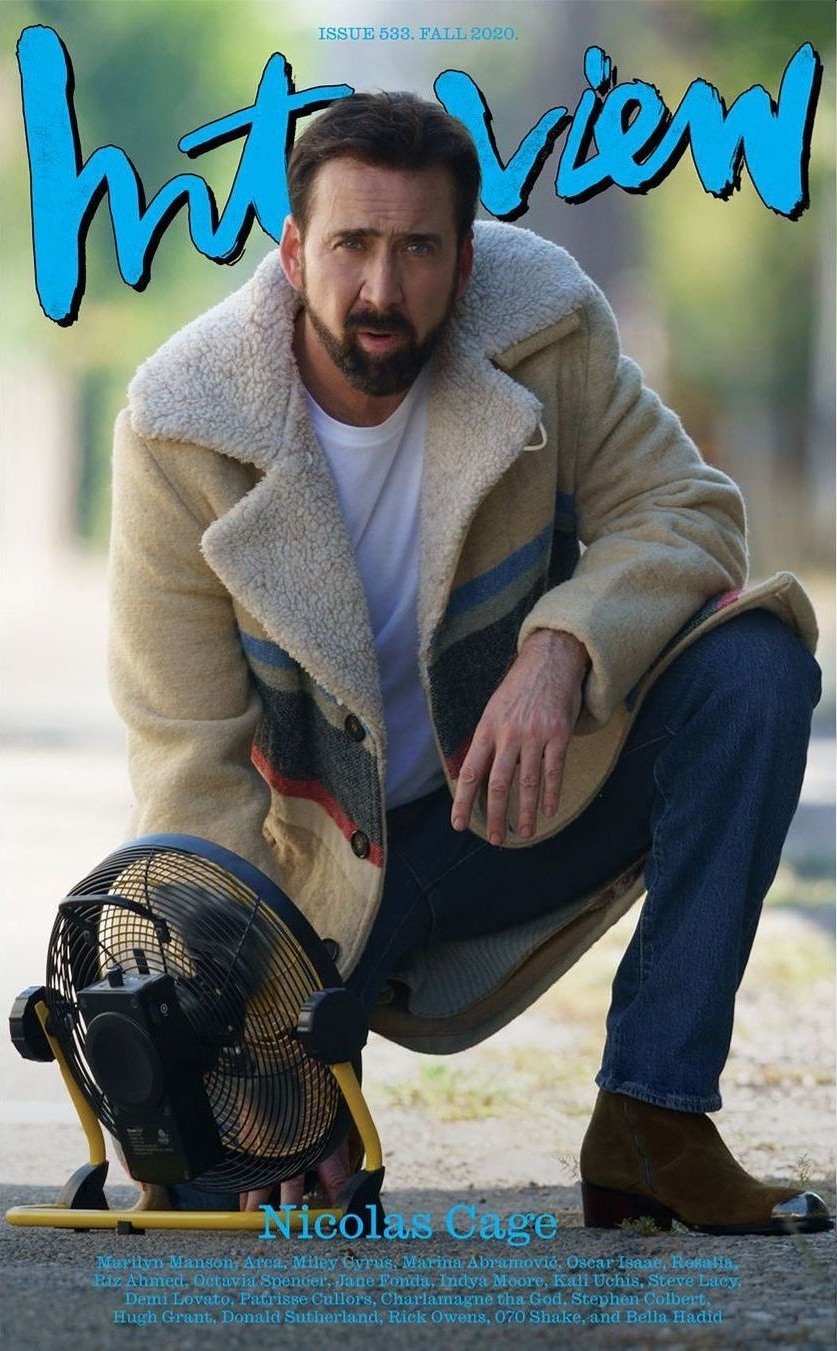 If you don’t mind wading through pages and pages of crap, you’ll probably enjoy Nicolas Cage’s Interview Magazine cover interview. It was conducted by his friend Marilyn Manson and it is, as they kids say, A LOT. That being said, Nick doesn’t come across as particularly bad here. He’s not evil or gross or a total douchebag. He comes across as a profoundly offbeat character who does weird sh-t just to scratch that itch. Cage is promoting his role as Joe Exotic, which is filming right now, apparently. He’s also working on The Unbearable Weight of Massive Talent, where he plays “a cash-strapped version of himself.” I think he’s also promoting some of his various direct-to-streaming/VOD projects, all of which are low-budget and barely seen. So… you can read the full piece here. Some highlights:

He surrounds himself with animals: “That’s why I like to surround myself with reptiles and fish and cats. I just bought a crow. His name is Huginn, after one of [the Norse god] Odin’s two ravens, Huginn and Muninn, and he’s amazing….he’s an African pied crow. He says “hi” when I walk into the room and “bye” when I leave. The other morning he started laughing and called me an a–hole. I’m trying to figure [out why he called me that]. He likes to eat cat food, which makes it easy, because I give my cats Sheba Perfect Portions, and Huginn enjoys it as well. I think he has a sense of humor, so maybe that’s why he called me an a–hole.

Manson offers to come to Vegas to spoon him: “I appreciate the offer, but I’m actually great with my cats. I don’t mind watching a movie with you, though. We were good buddies with Johnny Ramone, and we would all hang out at his house. Do you remember that time I had that mummy’s hand with tattoos on it?… It was an actual hand.”

His magic number: “Seven. It’s kind of cliché, but the number has had power for me. If you want to walk down the road of the esoteric, what’s always been most powerful to me is something as simple as blowing out candles on a birthday cake. I really take those wishes seriously. It’s almost like a meditation. And more often than not, those wishes have come true.

Whether he’s a gambler: “The last time I gambled was about 30 years ago. I was in the Bahamas, and I walked into a casino and felt like I had my mojo with me, like nothing could go wrong. My game was roulette. I went in with $200, and I didn’t miss a number, so much so that even the lady spinning the wheel said, “Nothing sweeter than a repeater.” In 20 minutes I turned $200 into $20,000, so I went and found an orphanage in the Bahamas, met all the kids and the headmistress, and said, “This is for you.” I put the 20 grand in her hand, walked away, and never gambled again, because if I did, it would ruin the power of that moment… And you can’t live in Vegas if you’re a gambler. I’ve seen it destroy people. Of all the addictions, I think it might be the worst.

Costar crushes: “It was when I was younger. I had a very powerful crush on Deborah Foreman when we were do- ing Valley Girl. I felt a lot for Bridget Fonda when we were doing It Could Happen to You, and for Penélope [Cruz] when we were doing Captain Corelli’s Mandolin. But as I got older, I no longer was interested in that. I was all about the work.

The connections with costars: “Well, you feel it, and that’s the weird thing about filmmaking. Everybody is so close. There’s a bubble over the whole set. And then, as soon as the movie is wrapped, no one talks to anybody anymore. It’s almost like we’re embarrassed that we were ever that close, like there was something artificial about it and now we don’t know what to do with our feelings. But I’ve remained friendly with most of my costars, and sure, you get feelings and use those feelings in the work, but you know that those feelings will be poison if you bring them home to your wife.

On women: “My reality with women has been mystifying ever since I was born. I didn’t have any sisters, and my mother did the best she could, but she wasn’t really in a state of well-being where she could be there for me, so I never really had female energy growing up. I had two older brothers, and my father was the caretaker, so I had a lot of masculine energy around me. Women have always been the most beautiful and the most amazing and the most mystifying and the most compelling of creations, so I tend to have a vulnerability toward them.

I laughed the entire way through this interview, it was so bonkers. Just the idea of Cage sitting at home alone in Las Vegas, with his cats and his new crow – a crow who calls him an “a–hole” – feeding them all cat food and thinking all of these thoughts. The story about handing $20K of gambling winnings to an orphanage… wow. The quotes about having crushes on costars and feeling embarrassed that everyone was so close during filming… that made me sad. Is Nick Cage a good guy? Or is he just a weird guy who just happens to be NOT awful?