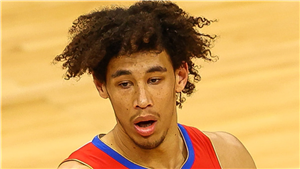 New Orleans Pelicans center Jaxson Hayes — the #8 overall pick in the 2019 NBA Draft — was arrested after an alleged violent altercation with police, TMZ Sports has learned … and it apparently got so extreme, the hooper and a cop were taken to a hospital.

We’re told law enforcement were called to an LA area home for a domestic disturbance early Wednesday morning … and when cops attempted to check on the parties involved, 21-year-old Hayes tried like hell to keep them from entering the premises.

Sources tell us 6’11”, 220-lb. Hayes got combative with cops and a fight broke out … with the ex-Texas Longhorns star getting tased in the middle of the scuffle.

The brawl was allegedly so intense, police put out an “officer needs help” radio call.

Hayes was taken to a nearby hospital to get treatment for minor injuries … and an officer involved in the fight also sought treatment, although their condition is unknown.

Hayes is expected to be booked for felony battery on a police officer. Cops are still investigating the initial alleged domestic incident, but both parties have been uncooperative.

We’ve reached out to Hayes’ rep. So far, no word back.