Molly-Mae Hague has opened up about her terrifying endometriosis battle which left her thinking she might ‘die’ from the unbearable pain.

The 22-year-old former Love Island star headed to her YouTube channel, where she discussed her painful symptoms before she underwent surgery earlier this year.

In a video titled ‘My Life with Endometriosis, Q&A Girl Talk’, the Pretty Little Thing creative director answered questions sent in by fans about her experience with the painful condition.

Endometriosis affects approximately 10% of the world’s female population, and it causes the womb lining to grow in other places in the body, including the ovaries and fallopian tubes.

After speaking openly about her diagnosis for the first time last year, the star went on to bravely reveal her surgery scars after going under the knife to help ease the symptoms.

Speaking to her 1.2million YouTube followers, the entrepreneur said that her symptoms were so painful she felt like she’d ‘been hit by a car’. 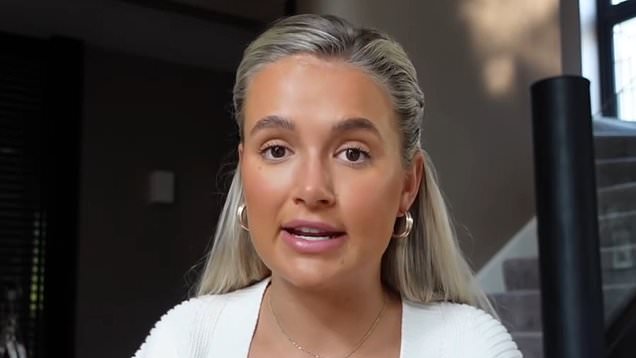 She said: ‘Mine have definitely worsened over the years, I cannot explain the levels of pain I have experienced.

‘I have actually nearly called myself an ambulance on multiple occasions because of the level of pain that I was in.’

The reality star opened up about the extent of the pain, saying it was ‘so bad’ she ‘feared for her life’ and thought she ‘wouldn’t wake up’ in the morning.

Molly-Mae explained: ‘For my body to be going through that much pain, what is it going through? I literally used to lie there and think, “Am I going to see tomorrow morning?”

‘I genuinely used to be in that much pain that I would be fearful I wouldn’t wake up the next day. It was so, so horrendous.’

Elsewhere in the tell-all video, Molly-Mae opened up about ‘excruciating’ sex with boyfriend Tommy Fury, 22, who she met while appearing on Love Island in 2019.

‘I will be honest, I do believe the painful sex symptom is what pushed me into getting my problem fixed.

‘Not only was I doing it for me and fixing it for me, which is obviously the main reason, I was also trying to do it for Tommy.’

She praised the professional boxer for his support during her endometriosis battle, and admitted: ‘I couldn’t ask for a better boyfriend in regards to my endo journey. He has been so understanding and so caring.’

Meanwhile, Molly-Mae and Tommy have just purchased their first home together.

The couple had been on the hunt to find their perfect home for two years, after they were forced to flee their rented Manchester apartment in October following a break-in and burglary.