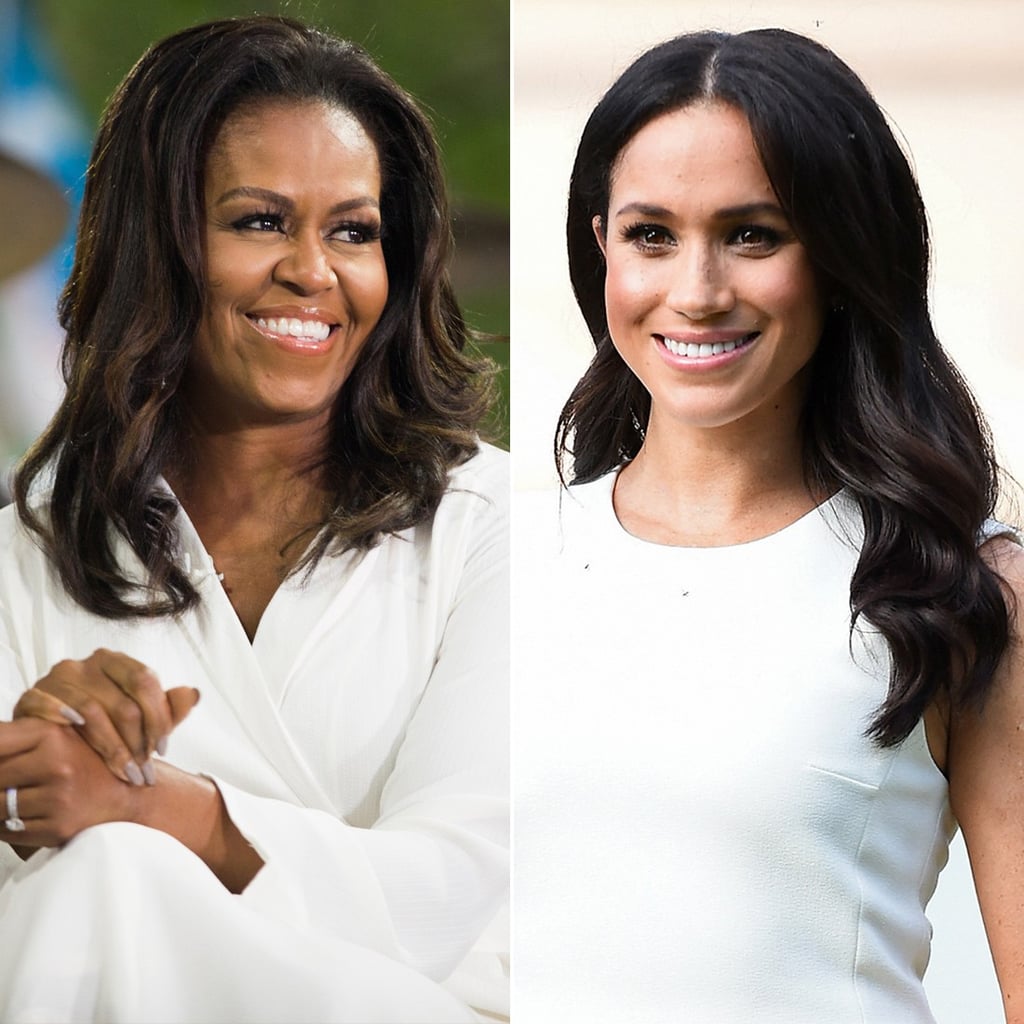 Michelle Obama has been busy promoting her new memoir, Becoming, and is opening up about everything from how husband Barack proposed to being a parent of two young women. In a recent interview with Good Housekeeping, the former first lady was asked if she had any advice for another first lady of sorts who is also gearing up to become a parent: Meghan Markle. Michelle was asked if she had any guidance for Meghan by a Good Housekeeping reader: “We’ve all fallen in love with America’s princess, Meghan Markle. What advice would you give her for her new role, which is a little like that of a First Lady?”

“Like me, Meghan probably never dreamed that she’d have a life like this, and the pressure — from yourself and from others — can sometimes feel like a lot,” Michelle answered. “So my biggest advice would be to take some time and don’t be in a hurry to do anything.”

“I spent the first few months in the White House mainly worrying about my daughters, making sure they were off to a good start at school and making new friends, before I launched into more ambitious work,” she continued. “Once I was ready, I chose to work on issues that I had a strong personal passion for. I chose children’s health because I’d lived through the difficulty of raising healthy kids as a mom. I focused on increasing access to education because I saw the power of education in my own life — that’s why I spent years talking to minority and first-generation students about getting to and through college. I wanted to do whatever I could to help them rise above the doubters that would come their way. There’s so much opportunity to do good with a platform like that — and I think she can maximize her impact for others, as well as her own happiness, if she’s doing something that resonates with her personally.”

Meghan officially became a member of the British royal family when she married Prince Harry in May, and the couple are expecting their first child next Spring. Harry has been longtime friends with the Obamas — he first worked with Michelle and Jill Biden on an event to honor military families in 2013, and they most recently came together for a visit to Chicago in 2017, just before he announced his engagement. While it hasn’t been confirmed if Michelle has met Meghan, it’s safe to say that they have a lot in common. Not only do they share a passion for education, health, women’s rights, and the empowerment of girls, but Michelle can also certainly relate to the level of scrutiny the duchess faces; both have had to adjust to new lives in the public eye, and both have managed to remain poised and graceful while being attacked for everything from their race to their clothing choices.

In my opinion, if there’s anyone who can give Meghan Markle advice on how to navigate her new world (besides, you know, her sister-in-law Kate Middleton), it’s probably Michelle. She’s got the experience, she’s got the wisdom, and she’s got the arms. Hopefully we’ll get to see photos of these two extraordinary women spending time together soon, but for now, see Michelle’s cute moments with Harry over the years ahead.