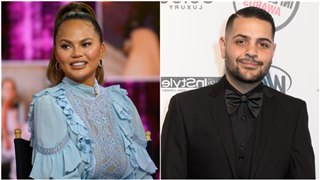 Michael Costello is willing to have a conversation with Chrissy Teigen.

One day after opening up about how alleged bullying by Teigen and her stylist, Monica Rose, made him suicidal, the 38-year-old fashion designer said in a statement that he’s still waiting to hear from the 35-year-old model personally. ET previously reached out to reps for Teigen and Rose for comment.

“I want to be clear — I do not wish ill on anyone. We are all works in progress and we deserve the opportunity to prove that we can do better. But progress takes time. We must show through actions that we have changed. After all, actions speak much louder than a 10-minute apology written on a notepad,” his statement began, referencing Teigen’s recent apology letter for her past actions. “However, nothing takes away from the years of trauma being bullied and blacklisted in the industry has left me.”

“I am not out for revenge. I only wish to speak my truth because I have been silenced for so long,” Costello continued. “I’m still waiting for Chrissy Teigen and anyone who bullied me to reach out to me. If they truly acknowledge that their actions are wrong, I welcome them with open arms to have a real conversation.”

In her Monday post, Teigen said she’s “in the process of privately reaching out to the people I insulted.”

“I understand that they may not want to speak to me,” she wrote. “I don’t think I’d like to speak to me. (The real truth in all of this is how much I actually cannot take confrontation.) But if they do, I am here and I will listen to what they have to say, while apologizing through sobs.”

Just hours after Teigen posted her apology, Costello said that he’s “lived with a deep, unhealed trauma” since the model allegedly called him a racist in a 2014 Instagram comment.

“She apparently formed her own opinion of me based on a photoshopped comment floating around the internet which has now been proven to be false by Instagram and since taken down,” he said. “When I reached out to Chrissy Teigen to communicate that I was the victim of a vindictive cyber slander, and that everything she thought I was is not who I am, she told me that my career was over and that all my doors will be shut from there on.”

Costello claimed that over the next few years, he was pulled off jobs “with no explanation” and received calls from mutual friends and colleagues that Teigen and Rose had allegedly “gone out of their way to threaten people and brands that if they were in any shape or form associated with me, they would not work with any of them.”

“Each time I have pleaded with Chrissy Teigen or Monica Rose to see the whole story before believing a false narrative a former disgruntled employee cast upon me, they didn’t give me the time of day,” he continued, adding that those alleged experiences made him suicidal.

Following Costello’s claims, a source told ET that Rose “never bullied Michael Costello or told people not to work with him.”

“She just simply didn’t like his clothes, so she didn’t pull from him for clients,” the source said. “That’s all it was. Monica is extremely upset about these allegations against her.”

Costello’s allegations against Teigen followed those of Courtney Stodden, who claimed that the model used to send them disparaging comments on social media.

Teigen publicly apologized to Stodden, calling herself an “insecure, attention seeking troll,” took a break from social media, and exited her role on Never Have I Ever amid the controversy.

In her Monday post, Teigen reflected on her past behavior.

“Now, confronted with some of the things that I said, I cringe to my core. I’ll honestly get sharp, stabbing pains in my body, randomly remembering my a**hole past, and I deserve it. Words have consequences and there are real people behind the Twitter handles I went after. I wasn’t just attacking some random avatar, but hurting young women — some who were still girls — who had feelings,” Teigen wrote in part on Monday. “How could I not stop and think of that? Why did I think there was some invisible psycho-celebrity formula that prevents anyone with more followers from experiencing pain? How did I not realize my words were cruel? What gave me the right to say these things?”

Teigen, who wrote that she was “so sorry” for her past actions, concluded her note by stating, “We are all more than our worst moments.”

“I won’t ask for your forgiveness, only your patience and tolerance,” she wrote. “I ask that you allow me, as I promise to allow you, to own past mistakes and be given the opportunity to seek self improvement and change.”

If you or someone you know needs help, please call the National Suicide Prevention Lifeline at 1-800-273-TALK (8255).