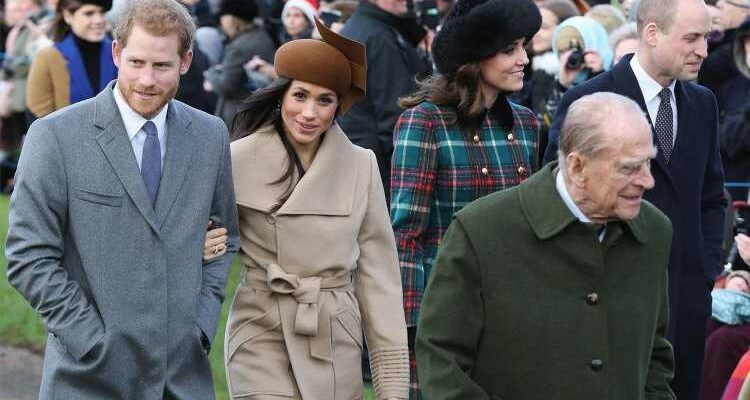 Prince Harry will be at the funeral of his grandfather Prince Philip next Saturday, although Meghan Markle will not, Buckingham Palace has confirmed.

"The Duke of Sussex is planning to attend. The Duchess of Sussex has been advised by her physician not to travel. So the duke will be attending," a royal spokesman said at a briefing on Saturday afternoon.

Meghan, 39, is expecting the couple's second child, a baby girl, later this spring.

Harry, 36, is preparing to head back to the U.K. in the coming days and it will be the first time he has been in the country in over a year. It is also the first time he will have seen members of the Royal Family since his and Meghan's interview with Oprah Winfrey aired last month.

Listen below to the episode of our daily podcast PEOPLE Every Day where we are looking back at Prince Philip's life and legacy.

With the guest list limited to 30 people under U.K. government guidelines due to COVID, it is expected that Philip's immediate family, including his children and grandchildren, will make up the bulk of those present in St. George's Chapel.

Attendants, such as the military bearer party of his coffin and the Dean of Windsor David Conner and the Archbishop of Canterbury Justin Welby are permitted to be extra to that 30 figure.

While there has been a steady stream of visitors, from Prince Edward and his wife Sophie, Countess of Wessex to Prince Charles, palace officials will not confirm whether any of them are in Her Majesty's so-called "bubble" and be allowed within close proximity of her.

The full guest list will be confirmed later in the week. Then, it will be announced who will be making any eulogy during the service. Following the Duke of Edinburgh's death on Friday, Harry and Meghan shared a tribute on Archewell Foundation website.

"In Loving Memory of His Royal Highness The Duke of Edinburgh, 1921-2021," reads their message of mourning.  "Thank you for your service…you will be greatly missed."

Harry, 36, has always been very close with his grandfather, who would have turned 100 in June. They were often seen smiling and joking around while on royal outings together.

Philip also played a crucial role in Prince William and Harry's lives after the death of their mother, Princess Diana, in 1997.

Watch Elizabeth & Philip: A Royal Romance – The True Story Behind the Crown on PeopleTV.com or on the PeopleTV app.

In The Diana Chronicles, author Tina Brown wrote, "A member of the Balmoral staff noted that Prince Philip, who had effectively lost his own mother at the age of ten when she was committed for three years to an asylum in Switzerland, was brilliantly effective with his grandsons, offering them gruff tenderness and outdoor activities like stalking and hiking to tire them out."

Philip also walked alongside the two brothers and their father Prince Charles during the procession from Kensington Palace for Diana's funeral.

Although he retired from public duty in 2017, the Duke of Edinburgh attended many important family milestones, including Harry and Meghan's royal wedding in May 2018.

He was also present for a historic family photo after the birth of the couple's first child, Archie, in May 2019.

News of the Duke of Edinburgh's death at age 99 was announced on Friday.

"It is with deep sorrow that Her Majesty The Queen has announced the death of her beloved husband, His Royal Highness The Prince Philip, Duke of Edinburgh," the palace said in a statement. "The Royal Family join with people around the world in mourning his loss."

The monarch will also refrain from carrying out any royal duties for the next eight days as she enters a mourning period.