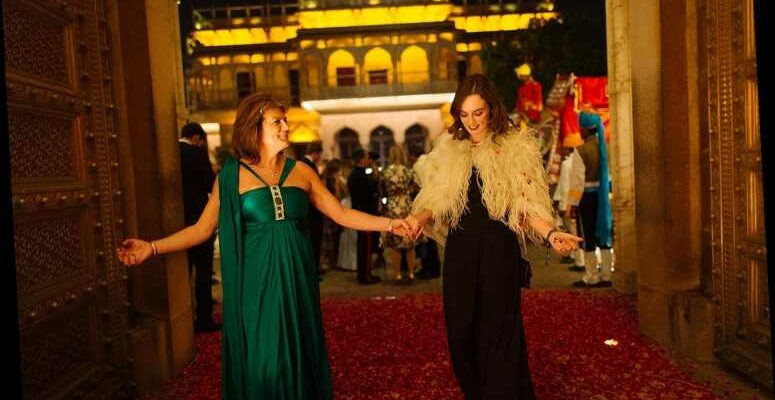 Meghan Markle isn't the only duchess to have her own podcast. On February 4, a new podcast series called Duchess will air on Spotify, Apple, Google, Amazon, Castbox and Deezer.

Created by Emma Manners, the Duchess of Rutland, and her eldest daughter, Lady Violet, 27, it aims to explore the reality of aristocratic life in 21st century Britain – and how living in a historic stately home is about as far removed from the champagne world of Downton Abbey as it's possible to imagine.

"When the children were very little, they came running into our bedroom screaming, 'Mummy, mummy, the castle's flooding!'" Emma, 57, tells PEOPLE about life inside the 200-year-old Belvoir Castle (pronounced "beaver"), which she has called home since her June 1992 wedding to David Manners, the 11th Duke of Rutland. It was also the setting for Windsor Castle in the first three seasons of The Crown. "I went onto the roof in my nightdress with my wellington boots and umbrella and managed to scoot down into a central gully and pulled out two dead pigeons who were blocking the drain," she shares.

"You've got to muck in," she adds. "The roof alone is two-and-a-half acres in size."

Duchess focuses on 10 women protecting historied British homes, such as Blenheim Palace, the onetime home of Winston Churchill, and Scone Palace in Scotland, where Macbeth, Robert the Bruce and King Charles II were all crowned. "We wanted to approach it from a female lens because so often history has overlooked these incredible matriarchs that have quite literally shaped the fabric of the building and of the family and its history," says Violet.

"I have called them my top golden girls," adds Emma, who grew up on a farm near Cardiff, Wales. "It's been fascinating and absolutely uplifting talking to extraordinary women who somehow make it work despite whatever is put in front of them.

"I'm not saying there's not glamor attached to these lives, but there's also an enormous amount of hard work and focus and drive and I would say it really wouldn't be for the faint-hearted," she continues. In recent months, this steely resolve has been tested to the limit by the arrival of the coronavirus pandemic, which has forced all of Britain's stately homes to shutter their normally bustling cafés and visitor rooms – although some have been able to keep their landscaped gardens open to the public.

This even includes Queen Elizabeth, who is facing an estimated $87 million shortfall because Buckingham Palace, Windsor Castle and the other royal homes have been forced to shut their doors to visitors.

"It's extraordinary to see these houses completely empty," says Violet, who was fortunate enough to visit four of the homes featured in Duchess during a brief relaxation of the U.K.'s strict COVID-19 rules. "It's incredibly sad." "These places are at their best when they're full of public wandering around or there's a party happening for someone's 70th," she continues. "I think that was something that was felt across the board with everyone that features in the podcast. So, let's hope they are full of people again soon."

To help make this possible Violet and her siblings Alice, 25, Eliza, 23, Charles, 21, and Hugo, 17, have used their quarantine time to help tend Belvoir's landscaped gardens and clear fallen wood from its surrounding forests so that the castle can re-open the moment their mom is given a green light.

It's all part of what Violet describes as "the profound sense of duty" that all the ladies featured in Duchess feel towards preserving the unique heritage within their homes.

"It stems from the royal family," adds Violet. "The Queen is the best example of that, and Kate Middleton is phenomenal as well. I feel enormously grateful to have grown up here and to have called this home. But, equally, it's a shed load of work. These places are really not that easy to look after!" What the Duchess' "Golden Girls" say:

Duchess of Argyll (Inveraray Castle, Argyll)
"I always forget that I am a duchess because I don't feel like a duchess. I think duchesses should be much older than me, much grander and more impressive."

Countess of Derby (Knowsley Hall, Merseyside)
"I grew up in Essex, the daughter of a great house called Audley End. I would go and see my grandfather [Robin Neville, 9th Baron Braybrooke] once a week and have tea, and I always changed into a skirt. He never saw me in jeans in my entire life."

Countess of Mansfield (Scone Palace, Perthshire)
"You can't afford to stand still, if you stand still the house will dilapidate."

Martha Lytton Cobbold (Knebworth House, Hertfordshire)
"It's helpful coming in as a woman — as the wife of the owner — to have a go, because people do expect you to make the wrong decision and they do expect you to fail, so you can only do one thing, which is to have a go and succeed"

Catherine Maxwell Stuart, 21st Lady of Traquair (Traquair House, Scottish Borders)
"When my father-in-law passed away and we were moving into the castle I remember my mum saying, 'It'll be lovely, darling, you'll be able to have breakfast in bed.' I thought, 'Oh Mum, you have no idea.'"

Lady Ingilby (Ripley Castle, Yorkshire)"When they ask you to marry them your first decision is, 'Do I love you?' The second is — and you'd be stupid not to think about it — 'Am I going to be committed to this [house]?' "

Lady Henrietta Spencer-Churchill (Blenheim Palace, Oxfordshire)
"My father said he was always fighting the battle of Blenheim. It goes on, it doesn't stop — it's every generation that has to fight a battle for Blenheim."