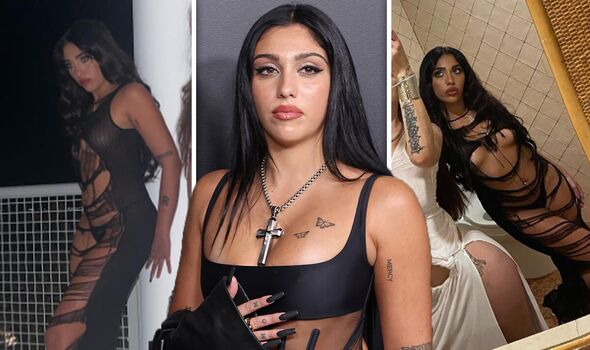 Madonna’s daughter Lourdes Leon looked the vision of her mother as she posed in a barely-there cut-out black dress. Lourdes left very little to the imagination in the tiny number.

Madonna’s daughter put on a very risque display as she took to Instagram to show off her revealing black shredded dress, full of cut-outs, exposing her gym-honed figure.

The unique dress barely covered her body, exposing her ample assets and curves as well as leaving her underwear on full display.

Lourdes was sure to show off her outfit from all angles as she shared several photos with her 452,000 Instagram followers.

This comes as her mother Madonna announced her 40th-anniversary comeback tour, including a total of 36 gigs, with two in London.

Lourdes Leon looked the vision of her mother Madonna

Madonna has always been known for her risque outfit choices and Lourdes Leon has proven the apple doesn’t fall far from the trees as she wore the exposing number. Lourdes posed in a barely-there shredded black dress, with the dress featuring cut-outs from side to side.

Lourdes Leon appeared to go braless in the revealing number

Lourdes Leon left appeared to go braless in the shredded black number, with Madonna’s daughter appearing to have a near wardrobe malfunction as her assets were barely covered. The shredded number shows nearly all of her legs, hips, midriff, and about half of her cleavage from a frontal view.

Madonna’s daughter Lourdes Leon wore minimal accessories, not to distract from her show-stopping dress. The design of the dress helped highlight the silver ring that she has on her belly button. She also went for simple black heels and wore silver rings.

Madonna’s daughter Lourdes Leon styled her long dark tresses in a waved look, falling effortlessly past her cleavage and down her stomach. Lourdes Leon is on holiday with singer Eartheater and has appeared previously in her music videos.

Lourdes Leon is Madonna’s eldest daughter from her relationship with fitness trainer Carlos Leon. Madonna wrote “Little Star,” a song on her 1998 Grammy-winning album Ray of Light, dedicated to her firstborn.