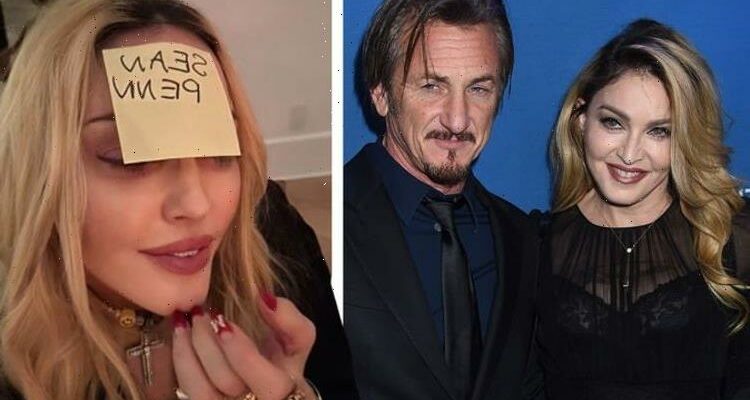 Madonna, 63, somewhat reunited with her ex-husband Sean Penn on Sunday evening, as she enjoyed a fun-filled games night with her pals. The singer engaged in some traditional party games, including Forehead Detective – where a familiar name arose.

I love my first wife very much

The game involves participants guessing what is written on Post-It Notes, which are stuck to player’s foreheads.

And as she took to Instagram to document the action-packed night, the songstress revealed she had been given a name rather close to home.

She posted a snap of Sean’s name scrawled across her yellow sticky note to her Instagram story.

Madonna and Sean were married from 1985 to 1989, until she and the Oscar-winning actor divorced.

But he admitted in the past that he’ll always hold a special place in his heart for his first spouse.

In 2018 during a segment titled ‘Sean Penn-y For Your Thoughts’ on The Late Show with Stephen Colbert, the Gangster Squad star said: “Ah, I love my first wife very much.

“There’s no [comparison]… you don’t compare those things.”

The games night also included a mini photoshoot, where the singer posed for a variety of snaps, working her best angles as she sat on her bed and sprawled across her bedroom bench while checking her phone.

Elsewhere on the singer’s social media, she shared a snap of her outfit for this year’s MTV Video Music Awards, where she donned an incredibly daring outfit.

The fit featured a leather garter dress, fishnet stockings, and a hat, and sent Twitter into a frenzy.

Opening up the awards show, she stepped out on stage in a Burberry trench coat over a leather puff-sleeve bodysuit and matching black hat.

“And they said we wouldn’t last,” she grinned.

She then turned around to walk back into the wings, showcasing the back of the high-cut bodysuit, leading to a slew of reactions both at the event and online.

One of those reactions came from former Good Morning Britain host Piers Morgan, who wasn’t impressed.

Instead, he branded her appearance as “cringe” but was soon attacked by Madonna’s loyal fanbase.

In response, some Twitter followers defended the songstress, as they declared her look to be “fashionable”.

One said: “It’s called fashion Piers, you just don’t happen to like it. Which of course is devastating for the world.”

A second remarked: “She has sold over 300 million records in her career. She can dress the hell how she wants.”