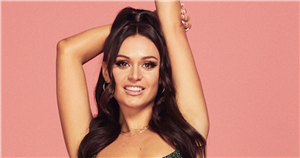 Olivia Hawkins has been announced as one of the hot new bombshells heading to the Love Island Villa in just a week’s time.

The brunette beauty is a 27 year old ring girl and actress, and has already rubbed shoulders with some huge names.

From KSI to Emma Watson, Olivia is no stranger to the celebrity world.

“I did a film with Jason Statham and had a nice 10-minute convo about life,” she shared.

“I've been a ring girl for KSI, I played a waitress in James Bond with Daniel Craig and I’ve also been a body double for Michelle Keegan and Emma Watson.” Speaking ahead of her villa debut, Olivia, who hails from Brighton, also revealed that she’s never been in a relationship.

“I feel like now I’m really ready to settle down and hopefully find the love of my life,” she went on.

Olivia also branded herself as a “bubbly” and “confident” person, as she teased that she’d bring “a little bit of drama” to South Africa.

Olivia isn’t the only one to have a celebrity past – fellow newcomer and celeb make-up artist Lana Jenkins has met some celebs too.

As well as painting some famous faces, Lana’s said to have dated Hollyoaks star and I’m A Celebrity… Get Me Out Of Here! runner-up Owen Warner.

Stephanie, 29, and Owen dated for nine months after their friendship on the soap turned romantic.

Lana, who is from Luton, is believed to be friends with many of the Hollyoaks cast after the former couple met through mutual friends.

The actor reportedly left flirty comments on Lana's Instagram page for a few months after splitting from ex Stephanie Davis.

The blonde beauty shared a loved-up snap of her and Owen back in June 2020 before going their separate ways.

Now hoping to find love in the villa, Lana admitted she “falls in love quickly”.

"I fall in love quickly. I tend to know quite soon if I could fall in love with that person and then, as long as everything is going well, I’ll probably tell them I love them in about a week," she shared.

"I don’t mind people texting me all the time but if you send me question marks if I’ve not replied to you in a while, you’re gone," Lana revealed.

"That's a really big red flag for me! Also if I see a guy trip over, that's an instant turn-off."