Katie Holmes’ quarantine romance with Emilio Vitolo Jr. was, like many things, “existing in a bubble” during the COVID-19 lockdown.

The actress was first spotted out with the NYC chef in September 2020, and a source told ET at the time that Holmes, 42, and her 33-year-old beau were the real deal. “They adore each other and can’t get enough of one another,” the source said. “Katie is like a teenager in love right now — he makes her giddy!”

While the pair limited their public social appearances during the coronavirus pandemic, they weren’t secretive about their relationship — sharing PDA on outdoor restaurant dates, meeting each other’s friends and families and clearly enjoying their time together.

However, as COVID restrictions began to lift and the pair dove back into their respective work, they spent more time apart and realized they weren’t as “compatible” outside of their quarantine bubble, a source tells ET, confirming their split earlier this week.

Here’s what we know about Holmes and Vitolo Jr. — from their first PDA appearances to their amicable split.

Holmes’ now-ex is a New York City chef, who works at Emilio’s Ballato in SoHo. His father, Emilio Vitolo Sr., bought the establishment in the early ‘90s. Vitolo is Italian on his father’s side and Peruvian on his mother’s side.

Vitolo grew up in his father’s restaurant, serving and cooking for famous regulars like Denzel Washington, Gwyneth Paltrow, Lenny Kravitz and more. He also seems to have some Hollywood aspirations of his own — appearing on Royal Pains, Inside Amy Schumer, and a few feature films — and has shared shots on social media with a number of celeb pals, including Whoopi Goldberg, the cast of It’s Always Sunny in Philadelphia, and Joe Jonas.

The pair was first spotted out together in September — though Vitolo did comment on one of Holmes’ Instagram pics in July, and a source told ET that the couple knew each other for almost a year before going public, having first met in the fall of 2019. Cameras captured Holmes looking casual in a tank top and jeans while she laughed and drank wine with Vitolo at Mediterranean restaurant Antique Garage in Manhattan, New York.

This was the first relationship for Holmes following her split from Jamie Foxx in August of 2019. The former couple had a very private relationship and rarely made public appearances together.

Despite the difficulties of getting together during the COVID-19 pandemic, a source told ET in November that the nationwide lockdowns and quarantines were part of the reason Holmes’ relationship with Vitolo moved so quickly.

“Katie wasn’t working or traveling as much as usual and things were slower at the restaurant for Emilio, so it really gave them the opportunity to focus on each other. Instead of a few dates over an extended period of time, they were able to have a month’s worth of dates in a matter of days,” the source said. 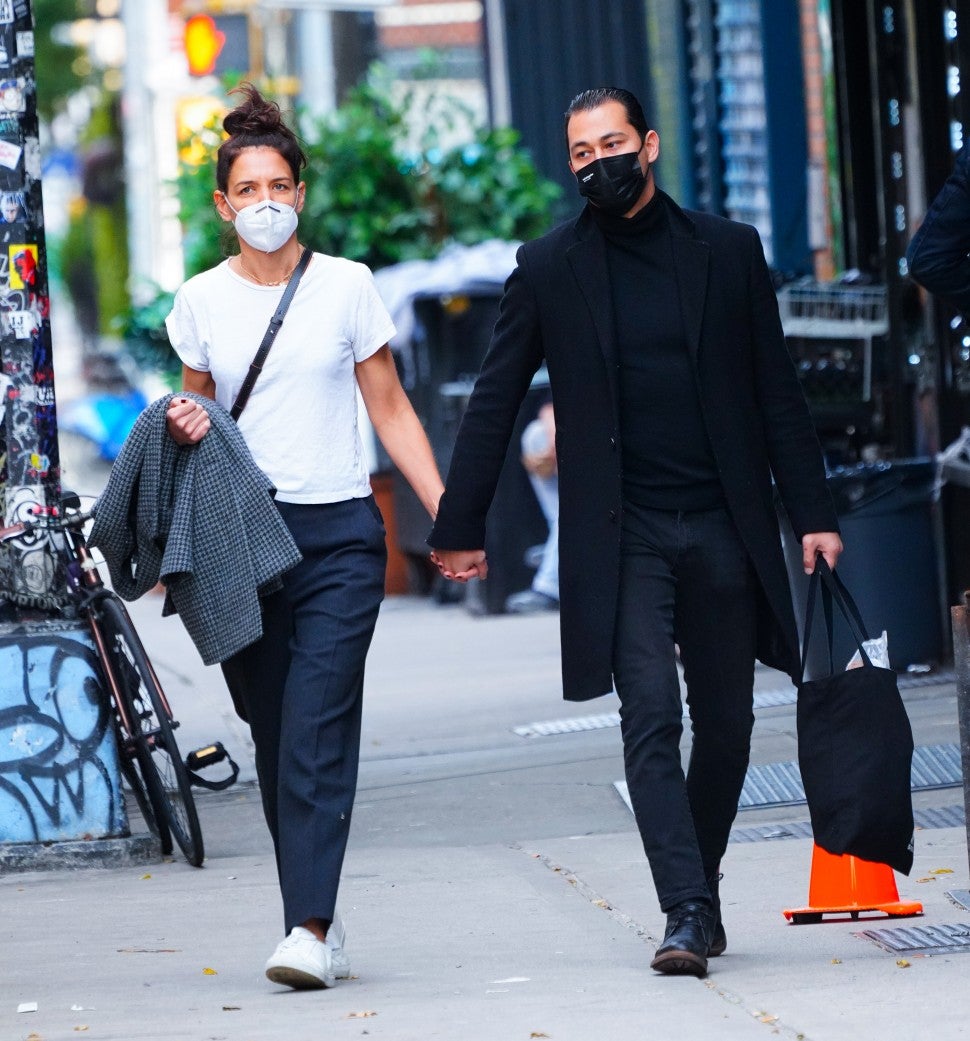 ET’s source said in October that this relationship was unlike any other Holmes has ever been in. “In the past, it seemed like Katie would sort of mold to her partners’ lifestyle,” the source shared at the time. “But with Emilio, Katie is so authentically herself.”

The two were no strangers to PDAand ET’s source said that they didn’t care what people thought of them or who was watching. “This is the real Katie and she’s playing by her own rules now,” the source added. “They’re so happy.”

“One of Emilio’s most attractive attributes is his work ethic and ambition — his family restaurant is a huge priority for him, which is why they spend so much time at the restaurant,” the source noted, adding Vitolo was able to steal a few nights away during the fall so he and his ladylove could enjoy a couple of nights in Upstate New York at a wellness retreat.

They’re also similarly dedicated to family. Holmes met Vitolo’s family early in their relationship and she spent a lot of time with them — especially his brother and father, who work at the restaurant with him.

“Katie gets along great with Emilio’s family. She fits right in and is totally comfortable around them,” a source said.

And while Vittolo didn’t have the chance to meet most of Holmes’ family due to pandemic restrictions, ET’s source said, “Her family would love him. He’s hard-working, a big family man, and he makes her so happy.”

A source told ET in November 2020 that the actress and the celebrity chef were going strong — and the pair’s cute comments on each other’s social media posts seemed to back that up (Vitolo Jr. made things Instagram official just before Christmas).

While she spent plenty of time with his family in New York City, Holmes and Vitolo Jr. kept their holiday celebrations separate, due to the ongoing COVID-19 restrictions. Holmes and her now-15-year-old daughter, Suri, celebrated Thanksgiving with a quiet weekend getaway to Upstate New York, without her beau.

“Katie and Emilo have been inseparable since they officially became a couple,” ET’s source said at the time. “He adores Suri and they get along great, but Katie has always been really good about ensuring she and Suri continue to have a lot of quality time just the two of them.”

Unfortunately, as COVID restrictions began to lift, the couple spent more and more time apart and started to realize they “aren’t as compatible anymore,” a source told ET after news of their split went public in early May.

The couple spent several weeks apart while Katie was in Connecticut working on a project, and after she returned, they determined too much had changed and agreed to amicably end the relationship and continue as friends.

“Before she left, they were inseparable, but their relationship was existing in a bubble,” the source explained. “Because of the pandemic, she wasn’t jet-setting around the country for jobs and he wasn’t tied up every night working at his family restaurant and his usually very busy social life was non-existent — so they had all the time in the world for each other.”

That being said, the source maintained that the two are on good terms and are incredibly supportive of one another. In fact, “Katie has been supportive of Emilio’s plans to pursue more acting jobs, something that took a backseat to focus on the restaurant,” added the source.

See more on the couple in the video below.

Katie Holmes Spotted on a Date With Emilio Vitolo: Meet the NYC Restauranteur