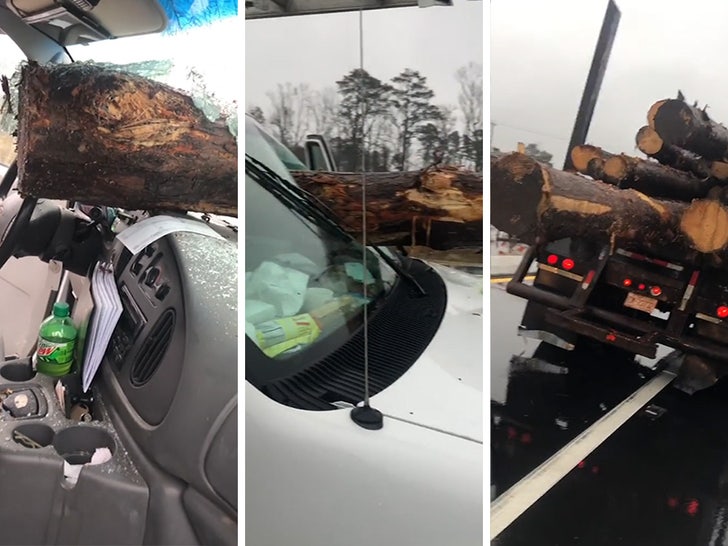 A crazy post-crash site has a lot of people reminiscing on early 2000s horror — because it looks eerily similar to a killer moment from the ‘Final Destination’ franchise.

A guy named Aaron Cox posted a video showing a giant wood log piercing the windshield of a white van, pulled over behind a transport truck on a freeway … which of course, is ripped right out of “Final Destination 2,” as any terrified viewer who remembers will tell you.

There’s not a whole lot of context — like where, when or what happened next — but it’s kinda funny … ’cause the guy filming, presumably Aaron, literally mentions ‘FD’ as he captures the wreckage.

You don’t see any blood inside of the van, which we think means (hopefully) nobody was seriously injured. Weirdly enough, the freakin’ radio is still playing inside, something that seems to indicate it looks worse than it actually was.

Still, the fact that life imitated art here to a T is uncanny.

If you haven’t seen the movie — it follows the same beats as the OG … starting with a mass death sitch where a bunch of people die from one incident (in this case, a highway pile-up that kicks off with the logs), which gets prevented by a character having a premonition … only for the Grim Reaper himself to circle back to everyone who cheated death.

Spoiler alert … everyone dies later in cool death scenes as the movie goes along — but that’s beside the point.

One last factoid about this — “Final Destination 2” has scarred so many who watched it that this exact joke was made on none other than TikTok itself by content creator PatD Lucky … who joked about being caught behind a big rig carrying a massive load of pipes, and immediately wanting to get out of the way out of fear of facing Officer Burke’s fate.